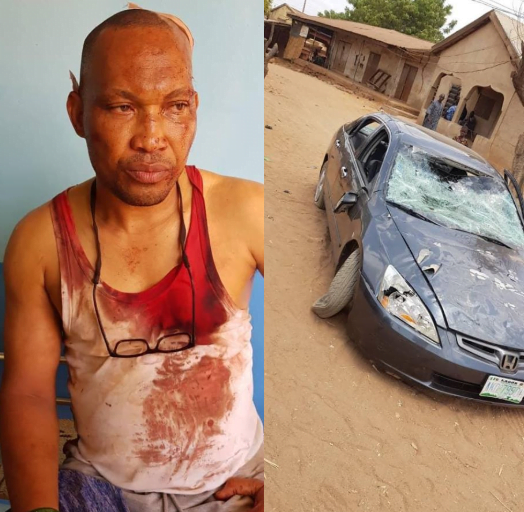 An Igbo businessman identified as Akanwoke Gideon, aka Arkgee, the CEO of Arkgee Computers in Yola has escaped death after being attacked by thugs in Taraba state.

The businessman who disclosed that he was attacked along Wukari Road in the state blamed politicians for his attack noting that politics is not madness.

Arkgee’s car was destroyed during the attack. He was also injured, so much so that he was bleeding badly and his white singlet turned red.

Sharing the story, Emmanuel Goji Hammana blamed the “Yan Chirani” in Taraba state for the attack.

His statement partly read:  “Thank God for sparing the life of Rotn Akanwoke Gideon (Arkgee), the CEO of Arkgee Computers Yola. He was attacked along Wukari Road by thugs. The extreme tendency displayed by ‘Yan Chirani’ in Taraba is getting out of hand. Politics is not madness..”

Recall Naija News also reported that an expatriate engineer was kidnapped few days ago in Kano state and his driver was killed.