‘Why FG must stop used cars from China’ 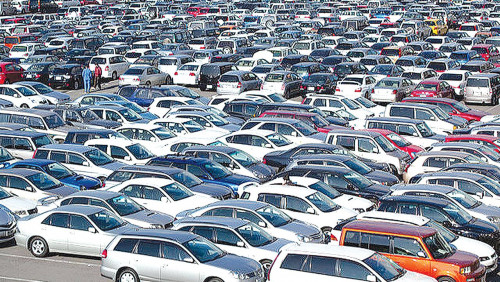 The Federal Government has been urged to halt the dumping of used cars from China to save the local auto industry.

The Chairman, Motor Vehicles & Miscellaneous Assembly Sectoral Group of the Manufacturers Association of Nigeria (MAN), Dr. David Obi, said the “Chinese gift” was not only shocking but would also amount to opening the floodgates for used vehicles to submerge the local industry.

Already auto industry stakeholders expressed outrage over the impending arrival of Chinese vehicles at the ports.

The move, according to them could impede Nigeria’s effort to resuscitate the automotive industry and ultimately put undue pressure on the already overstretched demand for foreign exchange (forex).

Besides, they opined that the plan would make price competitiveness fairer as the Chinese are known for rational pricing, although there were concerns that the country could be used as a dumping site for used vehicles.

Obi said when the impending ‘Chinese used car Armada’ is viewed alongside the rejection of the auto policy bill by the Presidency, what has befallen the auto industry could be described as “double tragedy” that will take a heavy toll on scarce foreign exchange and employment.

Obi, who is also the Chairman of DVC Group, warned that if allowed to flood the local market, the used vehicles from China would finish the damage the influx from Europe and America has been inflicting on the local industry over the years.

The Chinese Ministry of Commerce announced recently that a state-backed company in Guangzhou had officially commenced the shipment of used cars to Cambodia, Myanmar and Russia with Nigeria as one of the major destinations for the first batch of 300 units.

The export, it was reported, was expected to deepen implementation of China’s Belt and Road Initiative (BRI), promote the stable growth of foreign trade, and increase demand for new vehicles in China.

But, Obi warned that with the ban on production and sales of fossil fuel cars by some Chinese provinces, European countries and other parts of the world, taking due to take effect in a few years. Nigeria should not open its borders for the dumping of disused {internal combustion engine} vehicles from the industrialised countries.

“I was shocked. I was alarmed,” Obi stated. “Everybody knows that once China joins the shipment of the used vehicle to Nigeria, we are finished. Moreover, the shipment is an official initiative of the Chinese government and will be sustained over years, which means that millions of fossil fuel vehicles driven in China will end their life spans in Nigeria as the Chinese look forward to electric cars.

“Luckily for them (the Chinese), we are relieving them of the burden of disposing of vehicles they can no longer use. But, unfortunately for us in Nigeria, our government does not seem to realise the implications of allowing this kind of dumping.

“And, one of the implications of Chinese second-hand vehicles flooding the Nigerian market is that all the efforts being made to promote local auto assembly, deepen auto technology and generate jobs, would definitely be stifled. What should be of concern to the government and all well-meaning Nigerians is the loss of jobs, because the auto industry is like a network, which impacts on many other sectors of the economy.”

He decried the refusal of President Muhammadu Buhari to give assent to Nigeria Automotive Industry Development Plan {NAIDP} Fiscal Incentive and Guarantees Bill, arguing that the Chinese are simply taking advantage of a loophole resulting from the lukewarm implementation of the auto policy.

“One of the many implications of a legal framework for the policy and the imminent invasion of Chinese ‘tokunbo’ vehicles is that many renowned original equipment manufacturers (OEMs), who are afraid to invest in Nigeria because of our usual policy summersault, will remain reluctant because there is no assurance that their investments will be protected.

“It is also very ridiculous to hear the argument that tokunbo vehicles are not on the import prohibition list and therefore should be allowed to freely come in as long as they are not old. The emphasis should rather be on the loss of jobs resulting from the present inactivity in the auto-manufacturing sector.

“And there is no way the situation will improve if we continue to allow used vehicles to flood into the country while we take one step forward and two steps backward with the auto policy.”

They advised the Nigerian government to take a cue from the United States of America, which has been locked in a trade war with China over the need to protect American manufacturers and their products from the invasion of imports from the Asian country.

Recalling how he received the news of the coming of used vehicles from China, an auto industry analyst and Senior Vice President {Strategy & Development}, Centre for Values in Leadership [CVL], Rasheed Adegbenro, said: “When I got the information, my immediate reaction was, ‘used vehicles from China? We are finished!’ ”