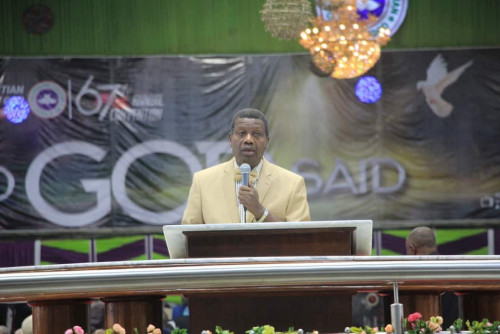 The Redeemed Christian Church of God has ordained 12,811 Deacons and Deaconesses and 4,060 Assistant Pastors at its 67 Annual Convention, which kicked off at the Redemption Camp on the Lagos-Ibadan Expressway on Monday, with the theme: “And God Said.

Describing the 2019 Convention as a mighty and prophetic one never seen before, Pastor Enoch Adeboye, the General Overseer of the Church, had in July promised participants some of the first things God said to man

God said to man “he is blessed, he will be fruitful, multiply and have dominion.

Pastor Adeboye prophesized that participants who have challenges in those areas of life will be relieved of them at the Convention.

On Monday morning, the 12,811 Deacons and Deaconesses were ordained in the tradition of the church.

The church’s National Overseer, Pastor Joseph Obayemi, presented the candidates to the General Overseer for ordination to help in the growth of the church and in service to God.

The candidates were so many that the ordination was done in batches with senior ministers taking turn to lay hands on them.
The number of those ordained on Monday was 1,563 higher than the figure of last year when the Pastor Adeboye ordained 11,258 deacons and deaconesses, drawn from various parishes of the church.

Explaining the process of ordination, Adeboye said: “In the Redeemed Christian Church of God, ordination is done by laying of hands, proclamation and prayers.”

The candidates filed out in batches for hand-laying by Pastor Adeboye’s senior assistants.

Making the proclamation later, he said: “Every time God speaks, it is a declaration of His will, power and purpose concerning the situation.

He always says what he means and means what he says.
He is never ambiguous or deceptive.
You can bet on every word from him.
Jesus is dependable and will not lie nor deceive.
Therefore, every word of God spoken to you or read from the scriptures is infallible, it cannot be stopped, it cannot be hindered and it cannot be broken.

We ordain you as Deacons and Deaconesses in the Redeemed Christian Church of God in the name of the Father, the Son and the Holy Spirit.

Adeboye also prayed for them.
The ordination of the Assistant Pastors on Tuesday morning followed the same pattern, while the ordination of 1,885 as Full Pastors will hold on Sunday.

The ordination was one of the resolutions of the Governing Council of the RCCG at the end of the 2018/2019 calendar year.
Other resolutions included:

Transfers of pastors and others this year

Sunday School Teachers to meet only fortnightly now to prepare for Sunday School (Prep) for two weeks so that they can be free on two Saturdays of the month to go for Evangelism.

This also applies to the Choir – they will be meeting fortnightly.

Full Timers” can even rise to become the General Overseer
The Establishment of seventeen new provinces and one new region. Because the “West Coast” of Africa is quite large; it will be further divided into three Sections/Regions with each manned by a SATGO.

In a short sermon on Monday night, Pastor Adeboye reminded workers of the church and House Fellowship leaders of God’s recognition of their contribution and His reward for them.