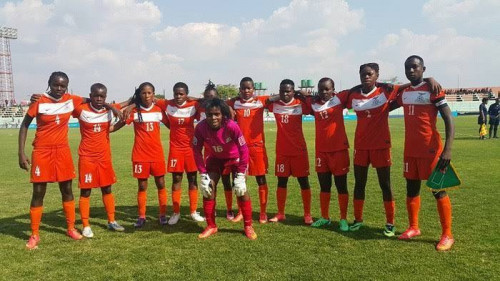 The All African Games female football event will see a lot of big games when it kicks off in August 16 as the continent’s biggest female footballing nation’s go head to head.

In Group A hosts, Morocco, Algeria, Equatorial Guinea and Mali will slug it out while Africa’s most successful team at tbe FIFA U20 Women’s World Cup Nigeria were handed a tough Group B draw with Cameroon, South Africa and Zambia  awaiting the Christopher Danjuma led side.

Just like the men’s tournament, all teams who participated in the African women’s Championship last year will play this tournament although this will serve as the qualifiers for the 2020 Olympic games women’s football event while the qualifier for the men’s football events at the Olympics will be the CAF U 23 Championships which is to come in Egypt later in the year.

Meanwhile, the Super Falconets opponents will include South Africa, Zambia and Cameroon all of who have suffered defeats against Nigeria in recent times.

The super falconets will also want to have a successful tournament as Nigeria are on the verge of securing the hosting of the 2020 FIFA U20 World cup.

The hosts of the 2016 African women’s Championship and runners up to the Champions Nigeria, were also at the receiving end of another Nigerian triumph at the AWCON in 2018 as the Falcons beat Cameroon in the semi finals.

Although, the central African country qualified for the 2019 women’s world cup in France and also in 2015 in Canada, they are yet to feature at the FIFA U20 world cup and infact only three countries have represented the continent since the inception of the tournament, Nigeria, Ghana and DR Congo taking the honours.

However, their current U20 team can draw inspiration from the fact that the country featured at the 2012 Olympics alongside the South Africans, a terrain the Nigerian Female team have failed to feature since their last Appearance at Beijing 2008. The young lionesses will hope to keep the Nigerians out of the Olympics in Tokyo 2020 once again but this time it’s not the main team who will fight the battle, it’s the young talents in the U20 where Nigeria has a upper hand having featured in all U20 world cups including a final appearance twice.

Banyana Banyana have over time improved rapidly and have appeared at the last two Olympic games in 2012 and 2016. Similarly, they featured at the FIFA women’s world cup for the first time at the 2019 edition in France.

The experience above and the preparation and support the South African Football Federation (SAFA) has given female football in the country including the establishment of the female league this year is enough to cause a concern for Danjuma and his ladies even though the South Africans do not have a pedigree when it comes to women’s football at the U20 level.

The zambians look like the whipping girls of the group, they lack the pedigree whatsoever in women’s football and it showed at the AWCON in Ghana 2018 where they failed to get out a group that had Nigeria, South Africa and an uninspiring Equatorial Guinea.

However, there were glimpses of hope as performances against South Africa and Equatorial Guinea got the team four points out of nine after beating the latter by five goals in the opening game. Subsequently, it will be disastrous for them to be underestimated by any team including the Falconets.