Are there any books written by the former Nazi SS?

Rudolf Höss, an SS officer, the longest-serving commandant of Auschwitz extermination camp, and the man who oversaw the beginning of the camp’s programme of mass killing of Jewish inmates, wrote his memoirs while in custody after the war.

This has been translated into English twice: once, as Commandant of Auschwitz, by Constantine Fitzgibbon, and again in the 1990s as Death Dealer: The Memoirs of the SS Kommandant at Auschwitz, by Andrew Pollinger. I’m not crazy about the melodramatic title of the second translation, but I think it might be slightly more accurate as a translation than the Fitzgibbon one. Nevertheless, I have used as my source a PDF of the Fitzgibbon one.

But they both convey the same tone in the writing. 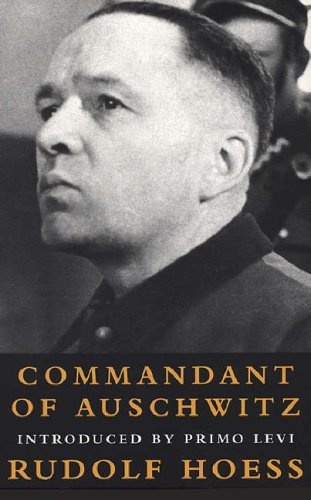 I first read Höss’ book many years ago, out of a combination of wanting to know more about Nazi Germany and curiosity about a man who was at the very centre of the most notorious programme of genocide of our time.

I don’t want to glorify it as ‘very strange’ or ‘weird’ or ‘really weird’, because I feel like some people attach a certain perverse glamour to a figure like Höss, imagining that he can tell us something about human evil, or whatever.

It’s not that the book contains detailed descriptions of him doing horrific atrocities and relishing the suffering of his victims, or whatever. Nor does Höss launch into angry tirades about the evil works of the Jewish people, like Hitler endlessly does in Mein Kampf, and nor does it have the kind of eager, quivering, fanboy excitement of Goebbels’ Diaries, where you can tell the author is just super stoked about being so close to the dynamo of history. (My tone here is deliberate: there is something repellently immature and puppyish about Goebbels’ worship of Hitler.)

He was born into a strict Catholic family in 1901, the eldest of three children. His father Franz Xaver sounds like a bully: he was a former soldier who ran a tea and coffee business and raised the family with strict discipline. Höss’ mother barely registers.

Rudolf grew up with very few friends of his own age. He had a horse, and was so fond of it that he’d have it sleep in his bedroom. When he felt stressed or unhappy, he’d go to the local reservoir and listen to the water lapping against the walls, and this would soothe him.

(As the father of a child with ASD, I can’t help wondering if Rudolf had some sort of disorder; not necessarily ASD, but this sounds like the kind of thing that someone on the autistic spectrum might do.)

Franz Xaver intended Rudolf to be a priest, and instilled into his son an absolutely rigid sense of duty and obedience. Nevertheless, when World War One broke out, in the only rebellious gesture of his entire life, Rudolf joined his father and grandfather’s old regiment, aged only 14. By 17 he was a Feldwebel and the youngest NCO in the Army. He was apparently a skilled and brave soldier, winning the Iron Cross First and Second Class.

After the war, he had much the same career track as many who ended up as senior Nazis: joined the Freikorps (right-wing paramilitary militia), joined the Nazi party in 1922.

In 1923, he and a bunch of other Nazis beat to death a schoolteacher named Walter Kadow, on the orders of Martin Bormann. Höss and the others were arrested, and he took responsibility and was given ten years in prison. He was released in 1928 and joined an agricultural league, and got married and had kids, and worked a farm. He also met Heinrich Himmler.

Höss, by his own account, loved his rural life with his wife and kids, but characteristically, as soon as a person in authority asked him to do something, he was immediately torn between what he wanted to do, and his sense of duty: 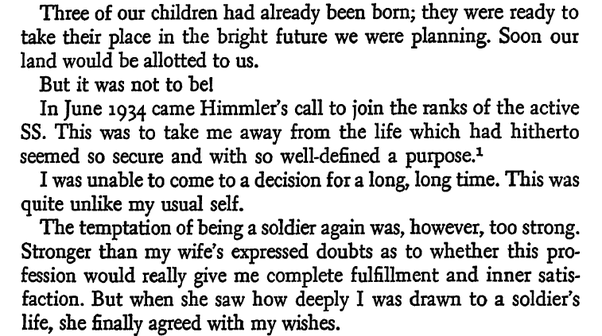 And so he joined the SS, where he was almost immediately assigned to the SS-Totenkopfverbände, the unit responsible for the operation of concentration camps. 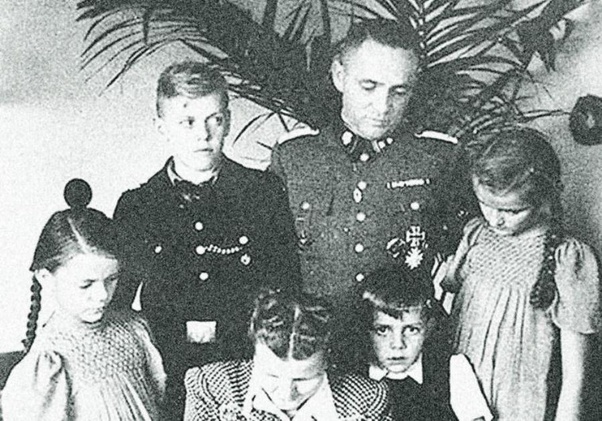 He first worked at Dachau, then Sachsenhausen. In 1939, after Poland was invaded, he joined the Waffen-SS.

In May 1940 he was appointed to run a small prison camp in Poland, a converted army barracks in the town of Oświęcim, which the Germans called Auschwitz.

Höss had observed how things were run in Dachau and Sachsenhausen and thought he could do better. He oversaw the expansion of the Auschwitz camp into the vast Auschwitz-Birkenau complex, which I visited in 2006.

In June 1941, Himmler summoned him to Berlin and told him that Hitler had given the order to carry out the final solution for what to do with the Jewish population in Reich territory, namely, kill them all. Auschwitz was to be a hub of this operation, and Höss was to start experimenting with ways of carrying it out as swiftly and efficiently as possible.

What was his reaction? 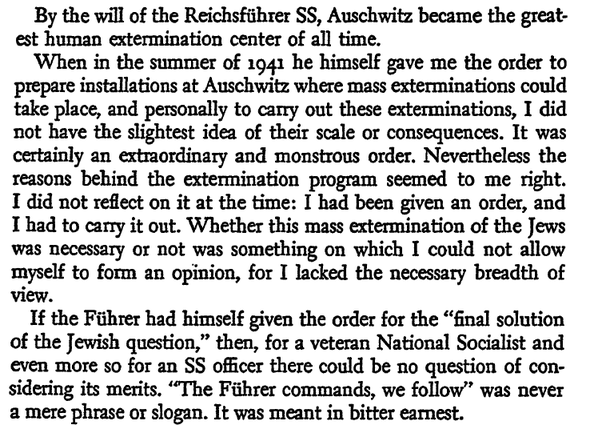 By ‘necessary breadth of view’, I take him to mean ‘a sense of morality being anything other than obedience to authority’.

It was, as far as Höss was concerned, nothing but a massive logistical problem. After various experiments, they concluded that using the pesticide Zyklon B was the optimal solution: cheap, not too labour-intensive and involving the least stress on everyone involved.

In 1942, in an incident which he omitted to mention in his memoir, Höss had an affair with a political prisoner, whose name is variously given as Eleonore Hodys or Nora Mattaliano-Hodys. The SS found out and investigated this, and although no formal charges were never lodged, Höss was removed from overall command of Auschwitz and made deputy to the inspector of concentration camps.

In 1944 he went back for one more operation: between 14 May and 9 July, 430,000 Hungarian Jews arrived in Auschwitz as a result of the German invasion of Hungary, and they needed Höss’ expertise in order to handle them. It was even called Operation Höss.

Of those 430,000 people, only about 50,000 survived the war. In what Adolf Eichmann called ‘an achievement never matched before or since’, the rest were all murdered at Auschwitz.

After the war, Höss disguised himself as a sailor and evaded arrest for almost a year, before being tracked down and arrested by British soldiers. He gave detailed testimony at the International Military Tribunal at Nuremberg, and wrote his memoirs.

In reading his memoirs, we need to take care. The Italian Holocaust denier Carlo Mattogno has spent a great deal of work, rage and spittle in attempting to demonstrate that the memoirs are essentially a work of fiction, beaten out of Höss by his captors, but Mattogno’s work is not serious history.

Still, I think we need to read them with an awareness that nobody writes their own memoirs as an entirely objective account of their own life. Jean-Jacques Rousseau is the only person who’s attempted to do that, and the attempt is a grand, tragic but fascinating failure.

If there’s a pattern in his life, it’s of a man continually losing himself in his own sense of duty and discipline. First it was the army, when he was still almost a child; then the Freikorps, then the party, then the Artaman League, then the SS.

At the end of his memoirs, Höss tries to look back at his life and see what he’d done, and assess whether he’d done the right thing or not. 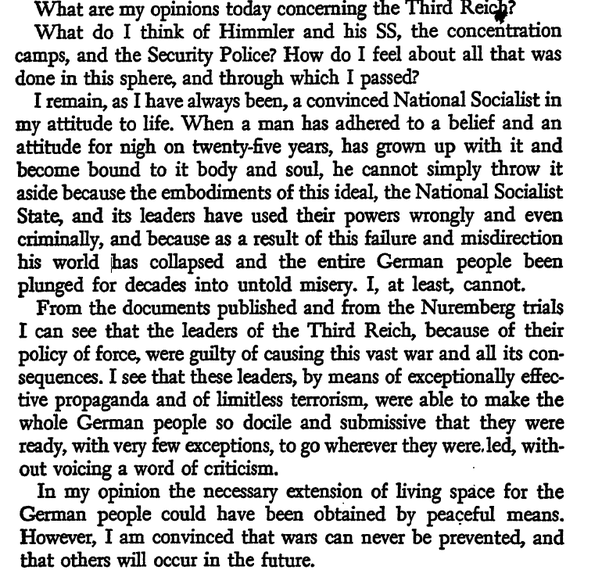 The ‘necessary extension of living space’—even in 1946/47, Höss still can’t bring himself to accept that the basic idea that German needed Lebensraum was not necessarily true.

He seems to believe that the programme of mass execution was something that happened to the Germans, not its victims.

But what about the morality of it all? 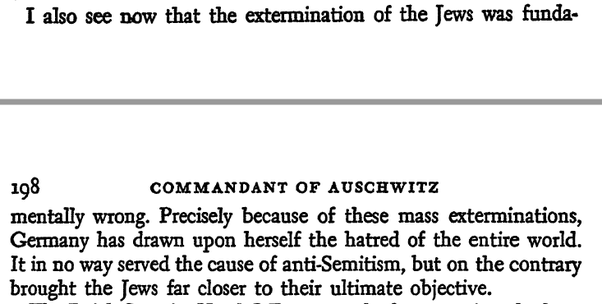 In other words, It was wrong to kill millions of Jewish people because it’s made us look bad and it’s only helped them.

Again and again, Höss rails in his book against individual acts of cruelty and brutality, such as SS dog handlers letting their animals loose on the prisoners for fun, or random beatings, or indiscriminate torture. He insists that he was all about rigid discipline and self-control.

But he utterly fails to see the amorality and cruelty of the entire system of which he was such a dedicated functionary. I believe him when he says he was disgusted by SS guards who got a kick out of being cruel to prisoners.

And I believe him because he is so blind to the evil of the system which he served.

Earlier in the book, recounting his inter-war SS career, Höss tells the story of how, when he was assigned to Dachau, he’d had to oversee the execution of a fellow SS officer.

The SS officer in question had been ordered to arrest and bring to the camp a communist who he knew quite well. The communist guy asked if he could visit his family to say goodbye and get a change of clothes, and the SS man, not being entirely made of stone, gave him permission and waited in the man’s living room, with his squad, chatting with the wife. Meanwhile, the communist guy escaped out the back.

On reporting this complete failure of duty, the SS officer was arrested, and on the personal orders of Himmler he was court-martialled and sentenced to death. Höss was assigned to lead the firing squad.

The SS officer was apparently calm and resigned, and the squad did its work, and Höss delivered the coup de grace, ‘so agitated that I could hardly hold the pistol to his head.’

What did he take away from this? 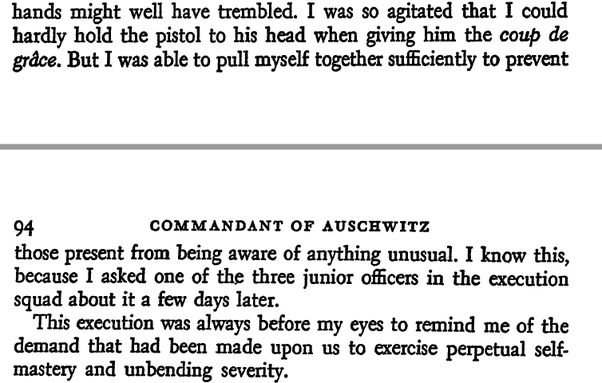 When it comes to understanding your own place in a system, Höss is the model for us all of what not to be like.

He ends his book with some curious lines: 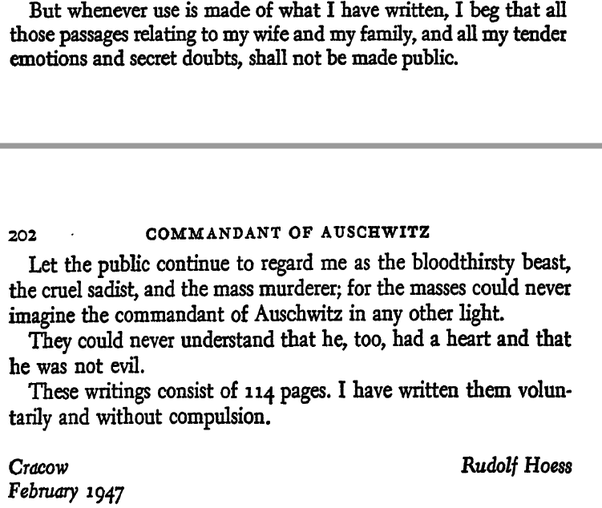 It’s not really surprising that Höss despaired that the public would never really understand what sort of person he was like.

He himself didn’t really understand what sort of person he was like.

He was sentenced to death for murder, and was executed at Auschwitz on 16 April 1947.

What is the richest tribe in Nigeria?
By lanreadeyemi • 10 months ago