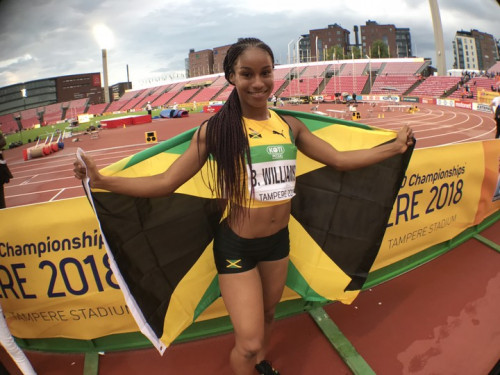 The double under-20 world champion was found to have the diuretic Hydrochlorothiazide in her system during competition.

Williams reportedly tested positive for the substance at June's Jamaican championships, where she clocked 10.94secs.

Her coach, Ato Boldon has blamed 'contaminated tablets' for the failed drug test. It is understood that Williams's defense rests on her taking medication for a cold.

Williams's representative Dr. Emir Crowne said: 'Our primary position will be that Ms. Williams bears no fault in the circumstances and there should be no sanctions levied against her. That will be our primary position.

'It will be an uphill battle, but this is one of the truly genuine times when there was nothing more than the athlete could do in the circumstances.'

Briana Williams has already qualified for the 100m at the World Championships in Doha next month and has spoken of her aim of winning Olympic gold as early as Tokyo 2020.