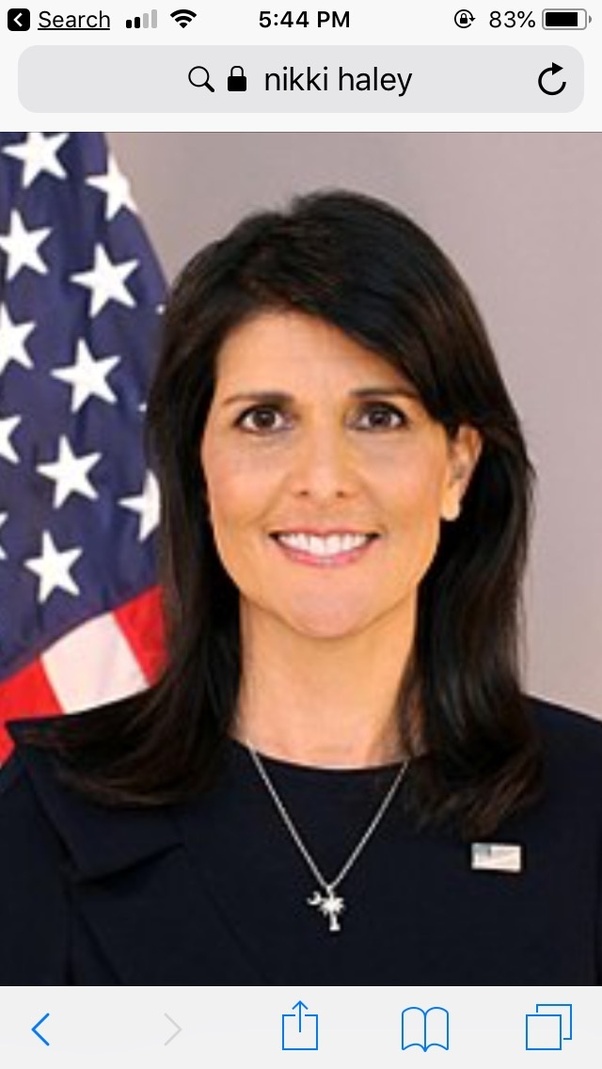 The woman above is US Ambassador to the United Nation, Nikki Haley. She was the 116th governor of South Carolina, and is a former member of the South Carolina House of Representatives. She’s married and has two kids, whom are either in college or supposed to be going to college this year. Now you may be wondering what has Nikki’s background has to do with the answer to this question. A lot, I promise to reveal if you’d stay with me

Just couple of minutes ago, CNN interrupted a news report to bring a breaking news, and that breaking news was the resignation of Ambassador Haley, as the US Ambassador to the UN, she’ll be going at the end of the year.

Now, like the typical CNN style of preempting news behind the news, several reporters and persons were interviewed within 30mins of this news breaking out, all with different views and opinion as regards to the real reason, why Nikki was leaving her UN post.

One, out of the many suggested reasons been spread around, as the likely reason behind her decision to go, was what struck me and I couldn’t help but start thinking again about my beloved country, Nigeria.

So, let’s look at it carefully and thoroughly to draw a possible answer to your question. Nikki is a politician, a very successful politician, especially when you consider her political achievements, which I tabled above. In fact I was extremely happy, permit me to say, as a non-American republican (yea, seriously I am), by how CNN anchors and commentators praised Nikki as a very intelligent and successful politician, some even called her, the shining light of the Republican Party, and the most likely first woman president of the United States. So that’s Nikki Haley, the same Nikki, whom some are saying is likely leaving her exalted post as the US Ambassador to the UN, owing to the need to pay for her two children education.

Whether that is true or not, is not my point here. My point is that, Nikki is a politician, and as Nigerians, we are used to hearing how politicians children are the ones who attend most Ivy League schools, both in Nigeria and abroad. As Nigerians, we know and understand that politicians are the ones with the money, and truthfully so, not money stolen, per say, but their earnings as supposedly public servants.

So, how come a former governor of a state in the US, a representative of the most powerful nation in the world;US, to the United Nation, is thought to be leaving her exalted position for financial reasons, something as little as two children educational financial requirements?

As a Nigerian, it’s almost unimaginable, especially when I consider the cost of quality education in Nigeria, and the fact that most people who pay the millions required to train a child in a good school here, are insignificant people, including insignificant politicians, like local government chairmen, state house of Assembly members, even middle level civil servants, amongst others. So how come Nikki may not possibly be able to pay, if she remains a public servant, and so need to go look for the money, either working private, or giving speeches?

So, the reason why Nikki Haley, a former US state governor, a US Ambassador to the UN, may not be able to pay her children’s school fees, if she remains in office, is one of the keys to good governance.

The amount of financial wastage, something we call salaries, allowances etc, attached to our public offices, especially at federal level, is mind -blowing. It’s crazy, and unimaginable anti-democratic. Good governance cannot be possibly, if Nigeria continues to waste her resources, servicing a sectional few, especially our politicians, in the name of office entitlements.

Another yes, to your question would be the need to deal with the issue of godfatherism, which constitutes a threat to democratic principles. A case in point, would be the drama that just played out in the APC Lagos state governorship primaries.

Good governance cannot be enthroned, when one man will sit in his house, and chose who becomes the party’s governorship candidate, and possibly the next governor of a state. At the same time, he rallies the people of the state against the incumbent, whose offense we understand, was sidelining the state party bigwigs, and cutting off the political godfather from some supposed juicy contract.

It started as a rumour, and was actually implemented just less than a month. An incumbent governor of the most powerful state in Nigeria was disgraced at his party’s primaries by a hitherto, unknown opponent, thanks to the political godfather, who was caught boasting on a national television of how he brought him, the governor, into politics and so has the power to decide his fate.

This is more significant when you consider, that majority of lagosians believed the governor performed above avarage, and hence didn’t think it’s possible for him to be ousted so easily, even if the godfather wanted him out. But it happened, even after spitting fire during a world press conference, just days before the primaries.

So, you ask, how is that possible? It is possible, largely due to the traditional political nature and history of the Yoruba people. One that encourages absolute loyalty to a leader, whether or not, he represents the views of the people. So, as one video, which trended on twitter during the primaries revealed. Because the national leader said so, everybody must vote for the candidates endorsed by him, and that is final, and indeed it turned out so.

More appalling was the fact that prominent journalists who spoke or ran commentaries within this period upheld it as been democratic.

So, good governance is possibly, only, if Nigerians can deal with the issue of wastage arising from astronomical salaries and allowances to public servants, and having followers who will be bold enough to choose for themselves, as against doing the bidding of a supposed godfather, either because of the peanuts they get from him, or because he represents something they presume to be their tribal identity.

What is something common that you see most people do wrong?
By lanreadeyemi • September 21, 2019, 12 PM

What happens to people after long periods of no human interaction whatsoever?
By lanreadeyemi • August 22, 2019, 04 PM