Erosion: Houses In Buzugbe Street In Delta Set To Collapse, Residents Cry Out 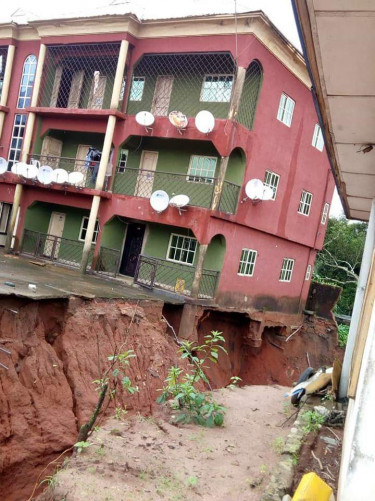 The residents of Buzugbe street, Ika North East Local Government Area, of Delta State, Nigeria has called on the government to come to their aid as their street has now become death trap.

Buzugbe street is located at the heart of the town of the governor's local government, and has long been abandoned by the previous and current government of the State.

Investigation by the team of our reporters revealed that many houses in the area have been collapsing as members and landlords of some of the houses are already taking their leave and are becoming tenants of other landlords.

Interacting with Mrs Osike, one of the Victims by Delta Igoruh media Team revealed that, many of the residents have already left their houses while some landlords are now tenant.

In her words, "I weep as I speak with you that I now look for where to sleep with my children. My husband died long time ago, and the place where my husband left for me and children has now been taken away by flood. It is sad".

"It is painful that Landlords and Landladies are now becoming in another peoples house. We are calling on the government to come to our rescue. We have suffered enough".

Mrs. Osike Victoria is a retiree from the Delta State Post Primary Education Board and a mother of Five and the landlady of No, Buzugbe Street, Owa, Delta State, Nigeria.