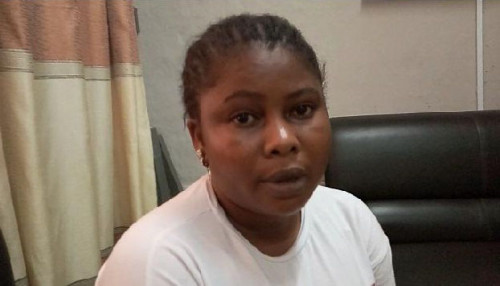 Ghana Immigration Service has arrested a Nigerian, Chioma Sabina, for allegedly trafficking teenage girls into Ghana and forcing them into prostitution.

The suspect, Chioma reportedly lured the girls into the country under the guise of securing them jobs as sales girls in a mall and a boutique she claimed to own in the Northern Regional Capital of Tamale.

After bringing them in, she then allegedly introduces them to prostitution.


“Each night, we have to bring at least 100 cedis, otherwise, they will beat us,” said one of the victims.

One of her victims, a 23-year-old sex worker disclosed that she has to sleep with up to 10 men a night to raise her daily target. “If not you won’t know peace”

“When we came, the madam and her Ghanaian accomplice called Sof took our blood, fingernails, and pubic hair. And told us that now that they have those things from us, if anyone reveals the secret, they will make the person mad,” the victim recounts.

Chioma has been transferred to Accra for further interrogations and possible repatriation.