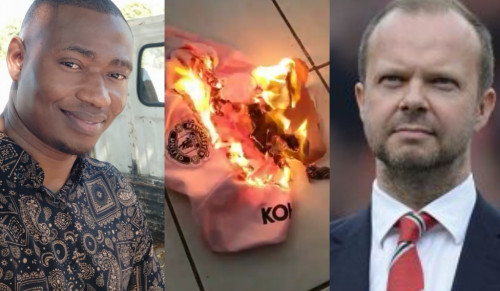 A South African man and a Manchester United fan simply identified as Ottis was left heartbroken after plans to bring Bruno Fernandes, Paulo Dybala, and Christian Eriksen to the club this summer didn't work out.

The heartbroken man angrily burnt his jersey and blasts the executive vice-chairman of Manchester United, Ed Woodward for turning the club into a “laughing stock.”

After failing to sign Dybala, Fernandez, Manzukić and selling Lukaku to Inter Milan, United fans are unhappy with owners The Glazers and have called for the Americans to leave the club.

Things worsened for manager Ole Gunnar Solskjaer after striker Romelu Lukaku was sold to Inter Milan for £76.5million but no replacement was brought in.

The heartbroken supporter shared a video on Twitter with last season’s United away kit going up in flames and took aim at Old Trafford vice-chairman Woodward.

“I’m heartbroken. My beloved club has become a laughing stock all because of that man #Woodward,” he said.

The fan further added that he had “no strength” to support the club next season and suffer another potential sixth-place finish.

“I’m watching the coming season as a neutral. I’ve no strength to witness the repeat of last season #WoodwardOut.”