HOW THE FOX DECEIVED OTHER ANIMALS

HOW THE FOX DECEIVED OTHER ANIMALS

In the olden days, when the mountains were young and beasts lived in harmony, animals take turn in ruling the wild. And there once lived a very crafty fox in the wilderness that was desperate to rule. He claimed to know how to revive the desert, feed the lions and create the vegetation for Elephants.

To the fowls, he promised a million grains and the mice would get all the cheese they wanted. There was great excitement in the wilderness. The pig was overly excited because the fox promised him a swamp. The pig made songs with the fox's name and sang his praises in the market square.

The day the animals agreed to handover the mantle to the fox, they called the fox and demanded a pledge from him.

He stood up and said to them:

My reign will last for 4 years, and if after 4 years I didn't keep my promise, stone me.

This statement boosted the faith the animals had in the fox and they expected the promise to be fulfilled.

But when the fox took the throne, things fell apart. The wilderness became insecure, animals fed on other animals. Jackals and Hyena formed a cabal and dictated what happens in the wilderness. Even the fox's wife became worried of her husband. Nothing he promised was fulfilled.

Time kept ticking and 4 years came. The raging animals remembered the words of the fox and waited in the square with their stone ready to cast. They waited to hear what the fox would say because they know that none promised was fulfilled.

Smart fox: he has perfected the deception. He remembered the pig yet again. When other animals summoned his to the square, he said to them:

I am busy developing the wilderness. The pig will represent me.

The animals asked among themselves:
Why won't the fox give his own account? Is he afraid of the stones or does he think us fools? 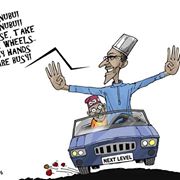