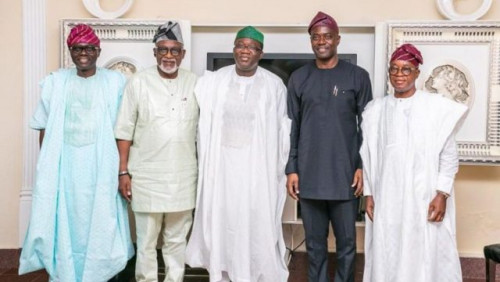 AKURE—SOUTH WEST governors, yesterday, warned that they were not bastards, following the spate of killings and insecurity in the region. They also said they are prepared to protect their people against external attacks.

The governors also kicked against nomads in the region and called on the Federal Government to introduce ranches instead.

This came as the remains of the 58-year-old Funke Olakunri, the daughter of the Afenifere leader, Pa Reuben Fasoranti, was being interred, amidst tears.

Chairman of the South West Governors Forum and Governor of Ondo State, Rotimi Akeredolu, lamented when the governors visited the Afenifere leader after the funeral service for his murdered daughter.

Speaking on behalf of his counterparts, Akeredolu said that the governors in the zone are disturbed and saddened by the spate of killings and insecurity in the region.

The Ondo State governor also declared that the governors are tired of the evils being perpetrated by Fulani herdsmen.” He added that it was time to ban nomadism in the region.”

While assuring that an end will soon come to insecurity in the region, going by the efforts they are making, Akeredolu said: “We are prepared to face this challenge. It is a security challenge that we shall not shy away from.

“All the governors are saddened by the killing of Funke. It shouldn’t have happened; it has brought us down. We should hide our face; we should be blamed.

“But we are prepared to face this challenge. It is a security challenge; something drastic and urgent needs to be done. This loss is not yours alone.”

He, however, assured Fasoranti that his daughter’s killers would be “smoked out from their hiding place.”

Also speaking, an Afenifere chieftain, Chief Ayo Adebanjo, condemned the activities of the marauding herdsmen and urged the governors to collectively fight the menace of insecurity ravaging the region.

In his sermon, the Anglican Bishop of Akure Diocese of Church of Nigeria, Simeon Borokini, said: “Nobody is happy and nobody is safe in this country. Our leaders should do something on the issue of insecurity.”

On the death of Funke, the cleric described her death as a loss to the Akure Community, Ondo State and Nigeria in general.

Also condoling with Fasoranti, the Deputy National Chairman of the PAN-Niger Delta Forum, PANDEF, Chief Francis Doukpola, called on the Federal Government to ensure the apprehension of the killers of Mrs. Funke Olakunri.

Doukpola led a delegation on a condolence visit to Fasoranti’s house in Akure.

Doukpola said: “That is the reason PANDEF was working closely with Afenifere, Ohanaeze Ndigbo, Middle Belt Forum, and other groups in the country for the restructuring of Nigeria, geared towards attaining a more cohesive, secured, peaceful and progressive nation.”