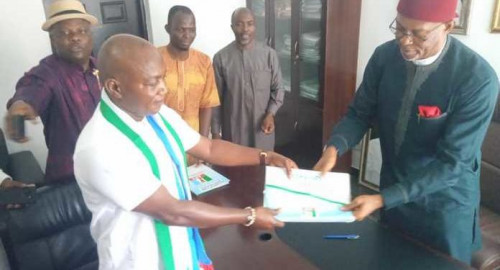 Bayelsa State stakeholders have backed a businessman and oil magnate, Chief David Lyon, for the governorship ticket of the All Progressives Congress (APC).

The stakeholders, who met in Yenagoa, the state capital, under the auspices of Bayelsa Stakeholders Forum (BSF) said they opted for Lyon after critically assessing other aspirants gunning for the ticket of the APC.

The Leader of BSF, Chief Alex Ekiotenne, who spoke after the meeting, described the ambition of Lyon as a divine mandate saying he was on a mission to transform Bayelsa.

Ekiotenne said: “The Forum has come to a conclusion to support David Lyon because, he is a man who has been tested and trusted, and we can trust him with our people.

“He is a good product and a good product is easy to sell. The youths in Bayelsa are yearning for a man like David Lyon. Bayelsans are hungry today, our communities are dirty because of bad governance. This has to change”.

He attributed the peace enjoyed in the Niger Delta region and Bayelsa to Lyon saying the aspirant developed a workable formula that protected pipelines in the region.

Flanked by other leaders of the forum, he said: “We have not fared well at all in Bayelsa state. Our communities are dirty. We do not have potable water and we do not have healthcare institutions that are working. We do not have an airport that was claimed to have being built, five to six months the airport was supposedly commissioned.

“Salaries are not paid as an when due; certainly there’s so much that is wrong in this state. The state is operated by the operators and those governing now do that as though it is a private endeavor and this is not good enough.