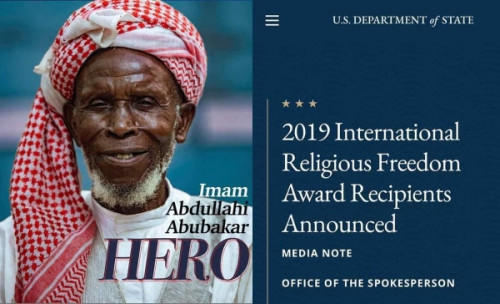 Sir Abubakar Abdullahi, the 83-year-old Muslim Cleric who hid over 200 Christians and non-Christians during a 2018 attack in Plateau State, has declared that life is too precious to be wasted.

Igbere TV had reported that in June 2018, Abdullahi hid over 200 people fleeing from an attack in Barkin Ladi Local Government Area of Plateau State at a Mosque in Nghar Yelena, Jos.

He was recently honoured with the first-ever International Religious Freedom Award (IRFA) by the United States of America in July, reports Igbere TV.

Speaking at an event in Makkah as part of activities marking the 2019 Hajj pilgrimage, Abdullahi, who was just nominated by President Muhammadu Buhari in the 2019 Hajj team, said saving lives is his hobby.

“It has always been my cardinal principle to save a life, no matter who is involved, Christian or Muslim. Life to me is so precious to be wasted”, Abdullahi said.

The imam called on Nigerians to shun violence and tolerate one another, irrespective of religious and ethnic differences.

He thanked President Buhari for honouring him with the membership of the Najj team and prayed to God to give him much wisdom to pilot the affairs of the nation to the yearning and aspiration of Nigerians.

Igbere TV reports that Abubakar is among 80-man committee charged with the responsibility of enlightening Nigerians pilgrims in Muna.

The event were Abdullahi spoke, was organised by the National Hajj Commission of Nigeria, NAHCON, to acquaint the public on its preparedness to ensure successful 2019 hajj.