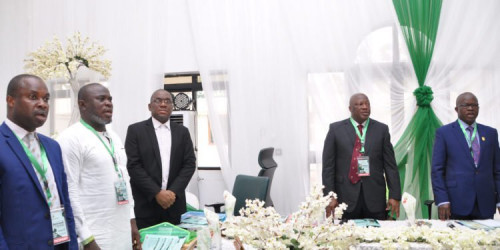 The Governor of Edo State, Mr Godwin Obaseki, has tasked new members of the State Executive Council to place high premium on effective service delivery to Edo people, urging them to build synergies among themselves to actualise his administration’s laudable vision for the state.

Obaseki gave the charge in Benin City, on Monday, at a one-day retreat for the State Executive Council members with the theme: “Moving Edo State Forward,” at Government House in Benin City.

The governor who was represented by the Secretary to the State Government, Osarodion Ogie Esq., noted that the workshop was to prepare the newly-appointed executive council members for the interesting task of governance.

“We must help the government to succeed. The security and welfare of the people is the primary purpose of government and the executive members must help in actualising this,” he added.

Obaseki urged the new executive members to build synergy, the spirit of cooperation and give listening ears to their subordinates.

Idahor said the overall responsibility of commissioners is to see to the success of the ministry they head and not to be at loggerheads with their permanent secretaries.

Other lectures delivered at the event focused on; Understanding the Financial Instruction: Fiscal Responsibility Law As a Veritable Tool to Good Governance; Anti-Corruption; An Overview of the Edo Procurement Law; and Purposeful Leadership: A Panacea for Effective Service Delivery.