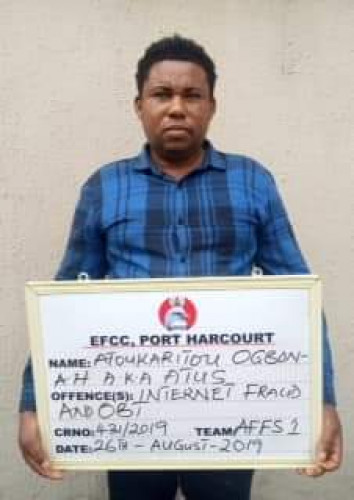 Operatives of the Economic and Financial Crimes Commission,  EFCC,  Port Harcourt Zonal Office have arrested two suspected internet fraudsters linked to the on- going collaborative investigations between the EFCC and the Federal Bureau of Investigation,  FBI.

Igbere TV gathered that the suspects were separately arrested in Port Harcourt,  Rivers State and Owerri,  Imo State. One of them,  Ogbonnah Atoukaritou, a leader of a loose syndicate of fraudsters allegedly engaged in Business Email Compromise,  BEC,  was arrested in Port Harcourt while the other suspect, Alpha Chidi Egbeonu, suspected to be involved in defrauding a US- based victim, Goldberg Segalla LLP and other yet to be identified victims,  was arrested in Owerri.

The suspects would be charged to court as soon as investigations are concluded.