On Our Gods' Behalf - Episode 1 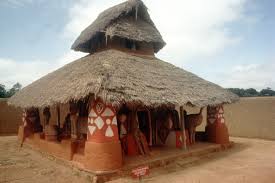 ‘It is the fault of the mouth not to speak, but when the ear refused to listen, the mouth is vindicated. I am an old man. I have seen over four scores and a half years on earth. What I see from the comfort of my stool, even if you climb a fence, you will not see it. Believe me, just like any mouth that ate a vulture automatically has become a witch, if you listen to my words then you have heard the voice of the ancestors.’ He moved his body as if he was searching for something. His brown bag, which appeared some ages older than the owner, was at the foot of the stool.

Picking it up, he returned to his former position; ‘Where are you from, young man?’ he asked.

‘I am from Umunnachi,’ I answered.

‘Umunnachi,’ he dragged the name. ‘There were days warriors lived in that land. Their story was legendary. Nnachi ogu.’ He tried to grin, but the absence of teeth in his mouth made him look like a crying witch. Then, I understood why his words were not clear.

‘Do you know Mokwugwo Okoye?’

I told him I know little about him.

‘But you know Saint Peter in the Bible?' he asked.

Being smart enough, I understood his sarcasm, it was funny enough to make me laugh.

I was born and raised in Onitsha in the eighties: barely a decade after the civil war. My generation knew little about the colonial era. We are the post-war generation whose fathers, still trying to recover from the war, were more interested in telling stories of their bravery; while our mothers narrated how they suffered during the war.

Names like Azikiwe, Awolowo, Tafawa Belewa and other freedom fighters were heard more in songs than in stories.

‘I know Saint Peter,’ I confirmed, ‘But Mokwugwo Okoye, I barely know.’

‘I see,’ he muttered with no laughter on his face. ‘So no street was named after the great man?’

‘Umunnachi has no named streets.’

‘What about buildings?’ this time his miserable eyes were directly on my face as I shook my head to confirm his fear. ‘None that I know of,’ I stated.

‘Mokwugwo,’ he lamented. ‘If the Pope were an African, and men were beatified by their wondrous deeds, that man would have been the first Saint from Umunnachi: little education but the most prolific writer of the colonial era. He was an instrument of the gods.’

Stretching his hand, he opened the brown bag and brought out a white chalk. ‘When you get old, you have fewer visitors and will expect none most times.'

'I have no kola but this is ‘Nzu’,’ he went on. ‘I don’t know if you will reject it like others before you.’

He wiped the surface of the chalk until it became white. ‘You see,’ he went on. ‘Your peers still bath only their stomach. Your generation is filled up with ‘ofekes’; young men who claim to know a lot, yet when one speaks in a simple proverb, they expect an explanation to every word.’ He paused. ‘But it is not your fault, my son. When you ask a person who was not present at the burial to exhume a corpse, he starts from the feet’s side of the corpse.’

With the chalk, he made a mark on his concrete floor and rolled the chalk to me. ‘Peace, my son. Peace.’ The more he tried to steady his voice, the huskier it sounded.

It was my first time drawing with ‘Nzu’.

When I was a boy, I saw my father, Papa, drawing with ‘Nzu’. It was on a day we visited our extended family in Awkuzu and Papa drew four lines on the floor: ‘The lines stood for the four market days: Eke, Orie, Afor, Nkwo,’ he had said. ‘And let each day bring good luck to us.’

In the same manner, I drew three lines on the floor and crossed them with a fourth just like Papa did in the past. Raising my face, I saw admiration on the old man’s face. ‘I was wrong about you,’ he said. ‘I was wrong. What is that your name?’

‘I heard you the first time,’ he said. ‘I hope you are not here to speak the grammar of repentance?’

‘No. I am a curator: a keeper of cultural heritage materials. I want to develop a private African museum. But my knowledge of African tradition was what I read from the books. It will be priceless if I learn from one who was there in the past.’

I was not done but the old man broke into a tearful laugh. It was infectious enough; I joined him. A dry cough from his throat stopped the amusement. Raising his right hand, he apologized to me: ‘Sorry, I couldn’t help it,’ he said. ‘Just that an ‘Isaiah’ wants to keep the heritage of our ancestors.’ He giggled. ‘If I may ask, my son, what is the meaning of Isaiah?’

I told him that Isaiah was a biblical prophet. I was named after him.

‘I think, that to be a good keeper of Igbo tradition,’ he continued in a low tone, ‘one must first be an Igbo. Isaiah; what actually does it mean apart from being a biblical prophet?’ His eyes shifted to the ground and I kept mute.

‘Twenty years ago,’ he went on, ‘then I was in my seventies and my late wife was eight years younger, we were forced into the church by Afamefuna, my first son. There was a young priest in that church; not even as old as my first grandson. His name was Father Ignatius. The young man said I would no longer be known as Okolobia agu. To him, Okolobia agu was a pagan name. So he sprinkled water over me and renamed me: Matthias. I begged him that I was too old to be known by another name; he wouldn’t listen. That same day, I came back home, poured a full bucket of water over my head and reversed the name. My son, Afamaefuna became furious and did not talk to me until he was lifelessly brought back to this house.’ The old man paused and allowed the pains of the past to sink into his marrow.

‘The priest wanted me to denounce my name,' he continued, 'but what would a name change in an old man? Till now, I don’t know the meaning of that name: Matthias. I don’t even want to know. And because I refused to respect the Priest, because I saw nothing wrong in the name given to me by my own father, my house became divided. Son against his father even till death.’

He paused. His eyes hovered over my face. ‘Do you know the meaning of Okolobia agu?’

Though I could guess, I told him I did not.

‘It literally means the ‘Young man of the wild’. A warrior, a great farmer, a defender of his people. That was what my father wanted me to be.’ He looked at me as if he wanted some response but none was coming.

Becoming uncomfortable, I asked: ‘Do you suggest I change my name?’

‘No, son,’ he said without hesitation. ‘Not necessary. A new name does not change a person. A scorpion can find a sweeter name, but as long as its stinger is still potent, it will always be a dangerous creature. Your name is your identity, it has little or nothing to define the man you are. We are lords over our names. It takes only you to decide on what to do with your name.’ He grinned with no teeth to show. His gum has lost its redness and there was no sign on his face to tell me what he has been through.

I waited for him to continue, but he kept looking abstractly at me with the funny grin stuck to his face. To break the ice, I said: ‘Sir...’

‘Okolobia,’ he said. ‘Call me Okolobia. That’s the name of my youth. When you will get older, and people start calling you by names that were not your birth name: names like Papa, Sir, and Nna anyi; you will long to hear your own name.’

Because I saw the excitement on his face when I called him by his first name, I concluded that there was a baby trapped inside the old body. ‘How can I learn about the gods of Igbo land?’ I asked.

‘To learn about the gods, you should first learn about their messengers,’ he said. ‘Go back to Onitsha. There was a man whom the gods gave an eagle; his name would not be mentioned if you doubt the gods. With him is the key to the banks. From the right of the east, he germinated. And a princess brought him back to his people. Till now, he watches at the entrance of the city; in the middle, where the city broke into branches, he stands there and will stand till the end of times.’

My tape recorder was on; nothing made sense in the utterances of the old man.

‘Go and find him,’ he said as I, being more confused than I was before meeting him, thanked him and left the small old room.

Read other episodes on www.writersgut.com