Sanchez's Farewell Message To Man Utd As He Departs 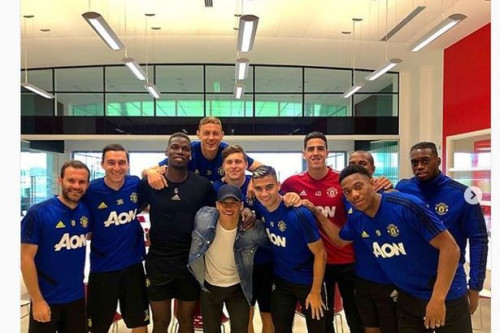 [b] Alexis Sanchez has confirmed his departure from
Manchester United after posting a parting message to the squad on Instagram.

The Manchester Evening News revealed that the Chilean bid farewell to Manchester United teammates before he left to complete his 10-month loan move to Inter Milan.

The 30-year-old has now posted pictures from the farewell meeting, with a parting photo put out on his Instagram on Thursday afternoon.

Writing on his social media account, Sanchez wrote: "Good luck boys for the rest of the season ️
@manchesterunited "

Sanchez was pictured arriving at Milan airport on Wednesday afternoon and is expected to be unveiled as an Inter player before the weekend.

United viewed Inter as likely suitors for Sanchez months ago and the Chile international is due to swiftly reunite with Romelu Lukaku, who lobbied Inter coach Antonio Conte to move for Sanchez in the next few days.

Inter do not have an option to buy Sanchez for a fixed fee upon the expiration of his loan, in case he performs well enough that his valuation soars in an already inflated market.

Sanchez is contracted to United until 2022 and Inter are understood to be paying three-quarters of Sanchez's £400,000 weekly wage.

That leaves Ole Gunnar Solskjaer with just Anthony Martial and Marcus Rashford as his senior striking options, with Mason Greenwood and Daniel James expected to grasp their first-team opportunities.

Greenwood could make his first start of the season on Sunday as United travel to St Mary's to face Southampton, with Martial an injury doubt.
Source:ttps://www.manchestereveningnews.co.uk/sport/football/football-news/man-utd-sanchez-inter-milan-16836274