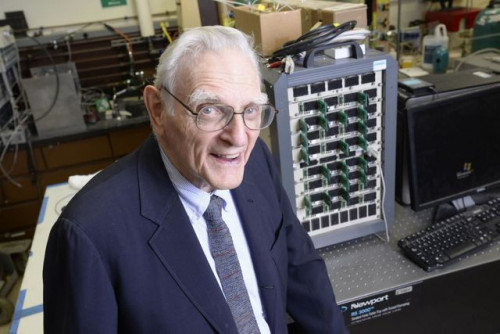 At 94, John Goodenough has accomplished more than most. Working at Oxford in 1980, he and his colleagues invented the rechargeable lithium-ion battery, the bedrock of most of today's electronic devices. For this accomplishment, he has been given more awards and distinctions than any one person could hope to receive.

But Goodenough is not one to rest on his laurels. More than 30 years later, and now a professor at the University of Texas at Austin, Goodenough has outdone himself by inventing an even better version of his ubiquitous lithium-ion battery.

Goodenough's new battery boasts triple the energy storage of standard batteries, along with a much higher longevity. As an added bonus, the battery doesn't explode like lithium-ion batteries can.

The new battery is solid-state, which means there are no liquid components in the battery. Traditional lithium-ion batteries are made of a solid cathode and anode separated by a liquid electrolyte that conducts electricity. Goodenough's solid-state battery replaces that liquid with a more efficient glass compound.

Although this battery may be a game-changer for electronic devices, don't expect to see it in your phone or car anytime soon. New innovations in battery tech have many large obstacles between development and production, so it may be a long time—if ever—before Goodenough's invention makes it to market.

But Goodenough has already done this once, so it's hopefully just a matter of time before his solid-state battery is adopted by the industry. Until then, we'll just have to keep using our inferior and fire-prone Goodenough batteries over the better version.