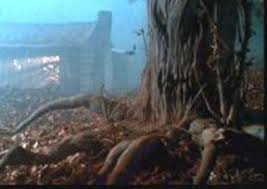 Okara, "she called." I answered from the dream world, jumping up before even realizing who it was that so coldly demands my attention. “Follow me” she ordered. The clouds of sleep briskly fell from my eyes as I schlepped behind her without questions.

She walked without looking back as I staggered and clinched my fists to fight off the early morning unwanted breeze, trying to be strong and manly the way she has always wanted me to be.

The morning was filled with the humming of birds, the dance of trees, chirps of insects, the purr of breeze and the cracks of confusion; harmonizing the sounds of our footsteps as we trawl the footpath up the hills of stones like ghosts going to the land of graves.

She suddenly stopped, between two rocks, under the gigantic branches of Obelebe tree. I stopped too, standing a few steps away from her, afraid of seeing her face. Whatever it is that caused that fear I don’t know.  I hated Obelebe trees. As kids, we were told that every Obelebe tree is the abode of evil spirits. As scary and unbelievable as the legends seem, it has overtime proven to be true, at least for us children.

“Your brother has done me much evil. "That was the first word." He has mocked my early morning tears; tears shed for his sake, for the sake of you all. No one has so terribly struck my heart where it hurt most as he has done. He will no longer be forgiven, his sins will visit him and with it, all his treachery. It’s hard for a mother to curse a son but even the womb that conceived him has cursed the day he was born.”

Her words sank like a hot morsel of eba deep into my heart. By now I have fully awakened to the realities of things. I had seen it happen before but pretended I didn't. As she turned to face me I could see the reason why she never looked back while we walked up the hill; she didn't want me to see her tears; she was hiding her pain and troubles from me. She didn't want me to see her weakness and desperateness. I stared confusedly into the deepness of her dark shallow eyes, searching perplexingly for the truth of things, searching for the assurance of the things that are obviously no longer where it used to be. Little me!

I was still excavating when she turned her back on me again and burdensomely continued.

“The adversaries of the east will befriend him. Bitterness will come from the west. Men will love him in the morning and hate him at night. He will desire victory but taste defeats. His sun will shine but he will always prefer fading lights. He will be judged day and night by the sins of others and you, Okara, the same curse shall befall you if you depart from this path that I'm about to place before you.”

It was not the words that frightened me. It was not the austere nor the coldness of the voice that spoke it. It was not the mourning attire of the woman nor the unusual atmosphere of the early morning weather. It was not the claps of thunder nor the striking lightening nor the shapeless duplicates of our shadows, no, they were not. I was afraid of the woman herself; this woman who has always been my place of hiding, she has transformed, and I cannot tell the tale exactly as I have seen it.

I was too lost in thoughts, and my ears preoccupied by the palpitation of my racing heart, that I did not even notice who was standing beside me. I don't know how we became three but now I know, truly, sometimes the world no longer need a hero but a monster.

Read other episodes on www.writersgut.com