Why is Switzerland so wealthy? Africa Should Learn 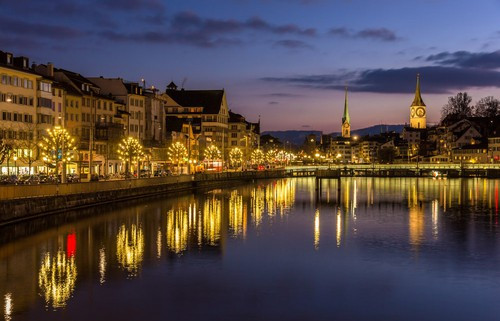 Many people think that Switzerland’s wealth is due to its status as a fiscal haven. But Panama, Cyprus, and the Republic of Liberia, are also fiscal havens.

Africa not only offers low taxes to international companies but also offers them capacity. However, countries in Africa remain in low income status while Switzerland remains one of the wealthiest countries in the world.

Not only this, all of Switzerland’s wealth comes without having natural resources and by not compromising on democracy and human rights. In fact Switzerland can boast one of the most egalitarian political systems in the world. Also, its welfare system is as good as that of Norway or Denmark.

In addition, its citizens not only have the right to vote every 4 years but every four months! The Swiss don’t just choose their leaders but they choose their policies with referendums happening several times a year. Switzerland has one of the world’s best political systems. Some argue that this is the reason as to why they are successful. In fact, the Swiss system is so good, that it could be a model for other countries. Here are some key aspects of it:

From a political standpoint, Switzerland is what is known as a confederation, and it is the only confederation that exists on the planet. It is made up of 26 states which are called cantons. The only thing that these cantons have in common are a constitution, foreign policy and a currency — aside from that they are totally different from one another. For instance, if you make a salary of 5,918USD and you live in the region of Jura, you are going to pay an income tax of 14 percent. But if you made the same amount of money and you live in the region of Zug, your income is only going to be 4%. If you have a shop in Geneva, you are going to have to close your shop at 6PM. But if you own a shop in Zurich you are free to keep your shop open for as many hours as you want.

The cantons can adjust their laws and pluralities as they see fit. What is more important is that they can compete with each other; this explains why in general the cantons have such low taxation.

Switzerland is so decentralized that they have four official languages; German, French, Italian and Romansh. When you visit Geneva which is in the French speaking part, you are not going to hear anyone speaking German. The billboards, road signs, and local newspapers are all in French. The same applies to Zurich with German or Lugano with Italian.

No head of government

Every country has a head of government who is responsible for certain things. Well, not Switzerland. Yet they are not living in anarchy. What they do is vote for a federal parliament which is similar to congress in the United States. This parliament then chooses seven (7) people who are going to become something like ministers or secretaries. All of these seven people have the same amount of power.

Each year one of them takes a turn becoming Switzerland’s international representative. Technically this person is the president of Switzerland but he or she does not have specific powers over the other 6 people. This is an important difference in the Swiss mentality because in other countries the president is a really powerful person but in Switzerland it is just a symbolic thing because the entire decision making is done by a team.

Switzerland holds several referendums every single year. Every four months, the Swiss go to the polling stations and they will vote for any proposal that has been put forward in the previous four months. These polls usually have big turn outs of more than 60%.

It would be very easy for a populist, anti-capitalist leader to emerge in a system like this, right? Remarkably, Switzerland is to the free market what France is to the wine industry. Don’t forget that this country is geographically isolated by mountains and has practically no farming land. This means that it has had to sign free trade agreements with pretty much every country on earth.

It is undeniable that Switzerland is a commerce loving nation BUT no more so than the European Union. The Swiss actually subsidize their agriculture as much as the Europeans or the Americans do — yet they also participate in the same trade embargoes that exist with Iran and Russia. The only difference is that Switzerland has embraced free trade since 1874 while the rest of the world has been doing it for the last few decades.

Switzerland will not participate in any armed conflicts, making it one of the few neutral countries in the world. They even stayed out in the Second World War despite most of the population being against Hitler. While the rest of the Europe ripped itself apart, killing millions and spending billions in reconstruction, Switzerland didn't and they used all their savings to improve their system.

Switzerland does have a military, but this army is entirely defensive and will only be used to expell external attacks. It will never be used to fight in anything outside of self-defense. This is where we see one of the few drawbacks of the Swiss system — the military or should we say…. their militia.

The drawback, of course, is not that they won't attack anyone. It is that every Swiss citizen must spend one month, of every single year, from age 18 to age 30, serving in the military. Even after this service period they must keep a gun at home. Plenty of people argue that this system is good with pundits saying it creates more entrepreneurs and less economic disparity. It is during this time in the military that the rich and poor are mixing together. Several startups and companies have been created from relationships that were formed while people were serving in the military.

The big question is… What about the freedom to choose? Should government force you to work in a place that you may not want to work?

This is another area where Switzerland shines. Despite the differences from one Canton to another, Switzerland has very low taxation overall. The laws to start a company are straight forward. Anyone can see those laws by just going online. Switzerland is one of the most transparent countries in the world which has encouraged a lot of international companies to establish their fiscal residence in Switzerland. But it's also very easy for Swiss people, living in Switzerland, to set up their own company

Banks do make up a large part of the Swiss economy but it probably not as much as people think. There are many other industries in Switzerland including Logitech, Nestle, and Norvatis. They are among the most popular companies in the world.

All of this is being done in a country with a population that is smaller than New York city's. Switzerland perfectly embodies the argument that it is not the country’s natural resources or luck to determine a country’s success but rather its systems of government and institutions that do this.

The Swiss have a lot to teach Africa in this regard.