Why this maid was a Godsent to my dad and I! 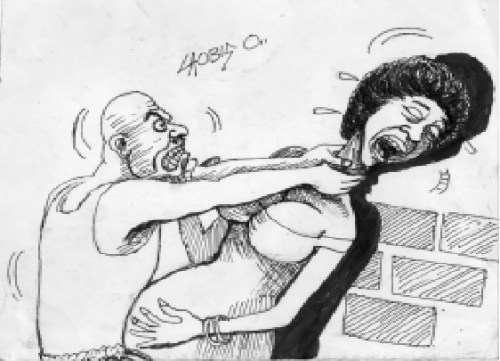 Zack is a 39-year-old I freak who runs a very high-tech cybercafe. He also has this reputation of being a chronic womanizer – a fact he readily agrees to, blaming his sexual addiction on his father, he explains. “My father never married my mother because she was in school when she had me. When my grandmother who was looking after me died, my mother was still busy pursuing her academic career, so it was decided I should go and live with my father. I was already a lanky lad of 15 and my dad was still unmarried. I couldn’t cook and it was quite expensive buying already cooked food, so he looked around for a maid. The first one lasted a few months and was sent packing because she stole. Then a co-worker bought this beauty to be our housemaid. She was a 19-year-old and the understanding was that she would learn a trade. So she settled for fashion designing.

“It was inevitable that my old man would start sleeping with Moira, the maid. It happened one night that, thanks to electricity failure, the house was so quiet, enabling me to chance on their secret! The weather was so hot that I couldn’t sleep. I heard giggles and low moans coming from my dad’s bedroom. I grew curious when I heard the same noise two days later that I crawled out of bed. This time, we had electricity and I peeped through the keyhole of my dad’s bedroom door. This bed was right opposite he door. I was surprised to see both of them starkers and Moira giving my dad oral sex. My dad looked silly and vulnerable. I’d never seen him naked before nor had I seen a full naked female body. I hurried back to my room for fear of being caught but I was so excited by what I had seen that I couldn’t sleep. For days, it stayed on my mind.

Then it was Friday night and my dad went on his usual drinking spree with his friends, leaving me alone as usual with Moira. We were very good friends by now and I really like her. She came to my room and I was relaxing on the bed. I felt my stomach turn at the sight of her but I didn’t know why. She noticed how uncomfortable I was – and how aroused. Not believing what I was hearing, she assured: “You are too tense. I’ll do something to help you relax. You wait, you’ll see, I know you will enjoy it.” My eyes were on stalks as she gave me the same treatment I saw her give my dad. My head was spinning. It was a dream come true! It felt so good that my body shook as I experienced my first orgasm ever. That relieved my tension, I tell you!

After this, we became even closer, concealing our little sessions from my father. A few weeks later, when my dad was out drinking again, I went to Moira’s room. I became excited when I saw her naked, expecting my usual treatment when Moira cheekily told me it was time I became a man. Then she proceeded to teach me how to have full sex. It was tremendous feeling – I never realised that anything could feel so good. Unfortunately, Moira never explained tome that sex could lead to pregnancy.

At the tender age of 16, I was hooked on sex. I had made a few friends in the mixed school I sent to and in the neighbourhood. I began regular sex with a classmate who was my steady, and two other girls down the street. We kept things secret of course, until my classmate told me she was pregnant. Her parents arranged for her to have an abortion and, fortunately for me, neither her parents nor my dad ever found out who was responsible. When she told me she was pregnant, it was then I realised the miracle powers of that sticky stuff. By then, Moira was also pregnant – and it could be my dad or me! She eventually gave birth to a lovely daughter and my dad married her. She was already a qualified fashion designer.

We are still great friends, Moira and I, but we no longer have sex. I will always be grateful to her for he bitter-sweet experience I had with he. I only wish I had known more about sex when I was young as I could have prevented my classmate’s misery.

From that experience, I kind of became addicted to sex – discovering it brought various experiences with varied partners. I got married somewhere along the line and we have beautiful children. I also have three other kids by three other women and everyday, I try to cure myself of this terrible addiction. But the temptations are so irresistible.