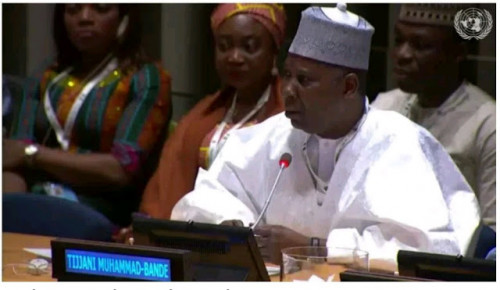 Professor Tijjani Mohammad Bande has been appointed as the new President of the United Nations General Assembly.

His appointment was announced by María Fernanda Espinosa Garcés, outgoing president of UNGA at a press conference in Abuja after a meeting with President Muhammadu Buhari on Tuesday.

Bande becomes the second Nigerian to be appointed President of UNGA after Mr. Joseph Nanven Garba who held the position between 1989 and 1990.

Bande until his appointment was the permanent representative of Nigeria to UN.

Bande was born at Zagga in present day Kebbi State.

Professor Bande was, from January 2000 to February 2004, the Director-General of the Centre African de Formation et de Recherche Administrative pour le Development (CAFRAD) in Tangier, Morocco. This is Africa’s premier institution with responsibility for training and research in public administration and management.

He was the Vice-Chancellor Usman Danfodiyo University, Sokoto, which ended in February between 2004 and 2009.

He served as former director-general of the National Institute of Policy and Strategic Studies, Kuru, Plateau State.

He became the Acting Director General of the National Institute from 2010 till March 2016.

6 Things To Know About Tekno
By terrygoodman • 2 years ago