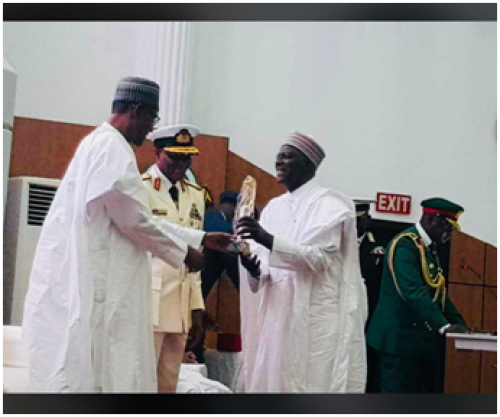 The Director-General, State Services, YM. BICHI, fwc was on 2nd August 2019 honoured with the Distinguished Personality Award by the National Defence College, Abuja during its Course 27 graduation ceremony which was also attended by President Muhammadu BUHARI, GCFR, as Special Guest of Honour.

This honour was bestowed on the DGSS not only as an alumnus of the College but one that is occupying the high position of the DGSS through which he has made outstanding contributions to national security, peace, unity and development of the country.

It is also in recognition of his sterling performance, excellent leadership qualities, focus and dedication to welfare of his personnel.

After the award ceremony at the NDC, staff of the Service jubilated with their amiable and fatherly DG and organized a surprise reception for him at the National Headquarters.

He was praised for his commitment to their welfare and determination to continuously reposition the Service for better. He was tasked by all to continue on the path that has earned him this recognition.

In his response, the DGSS expressed gratitude for the support he has enjoyed from Management and staff and enjoined them to sustain their loyalty and patriotism to the nation.