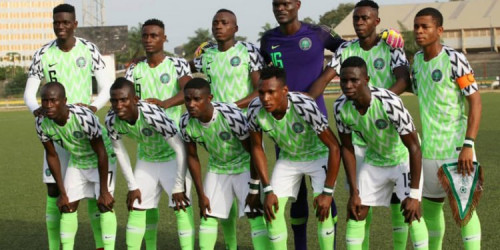 Contrary to permutations and expectations young Stallions of Burkina Faso Friday shocked the Flying Eagles 2-0 to clinch Gold in the finals of the Africa Games football event in Morocco.

Flying Eagles who had dispatched Mali 5-4 on penalties to hit the finals were tipped not necessarily to have a walk in the park against the Stallions in the final but to win the match even by a slight margin.

Coach of the side Paul Aigbogun had before the match challenged his boys not to give room for mistakes that could ruin the day.

Flying Eagles beat Mali 5-4 and lost to Burkina Faso 2-0
The result is thus an indication that all did not go according to plans or that  they underrated their opponents who ran away with two goals scored in the first half of the encounter played at the Stade Moulay Hassan.

It was apparent that the junior Stallions were given two major instructions, go, get the goals and defend it to the finish!

With the two goals in the kitty of the stallions, efforts by Flying Eagles to turn the table proved abortive as the stallions held tenaciously and guarded their victory to the end .

Nigeria thus settled for Silver while the Stallions pocket the Gold.

Senegal had on Thursday beaten Mali 4-3 on penalty after the Bronze match ended goalless.