TIME named Nigerian physician Dr. Tunji Funsho to the 2020 TIME100, its annual list of the 100 most influential people in the world. The full list and related tributes are available now at time.com/time100, and Dr. Funsho’s TIME100 profile is available here.

The list, now in its seventeenth year, recognizes the activism, innovation and achievement of the world’s most influential individuals.

Dr. Funsho, a cardiologist based in Lagos, Nigeria, is the first Rotary member to receive this honor for the organization’s work to eradicate polio, having played an essential role in ensuring Africa’s certification as wild polio-free in August of 2020.

“I’m honored to be recognized by TIME for my part in ensuring that no child in Africa will ever again be paralyzed by wild polio, a disease that once disabled 75,000 African children every single year,” said Dr. Funsho. “Eradicating the wild poliovirus in Africa was a team effort that required cooperation and dedication of governments, partners, Rotary members, hundreds of thousands of health workers, and countless parents who chose to have their children vaccinated against polio.”

As the leader of Rotary’s Nigeria National PolioPlus Committee, Funsho has worked alongside Rotary members throughout the country to raise awareness about the importance of polio immunization, encouraged governments and public figures to support polio eradication, and served as a vocal leader and advocate for Rotary’s fight to end polio in Africa. 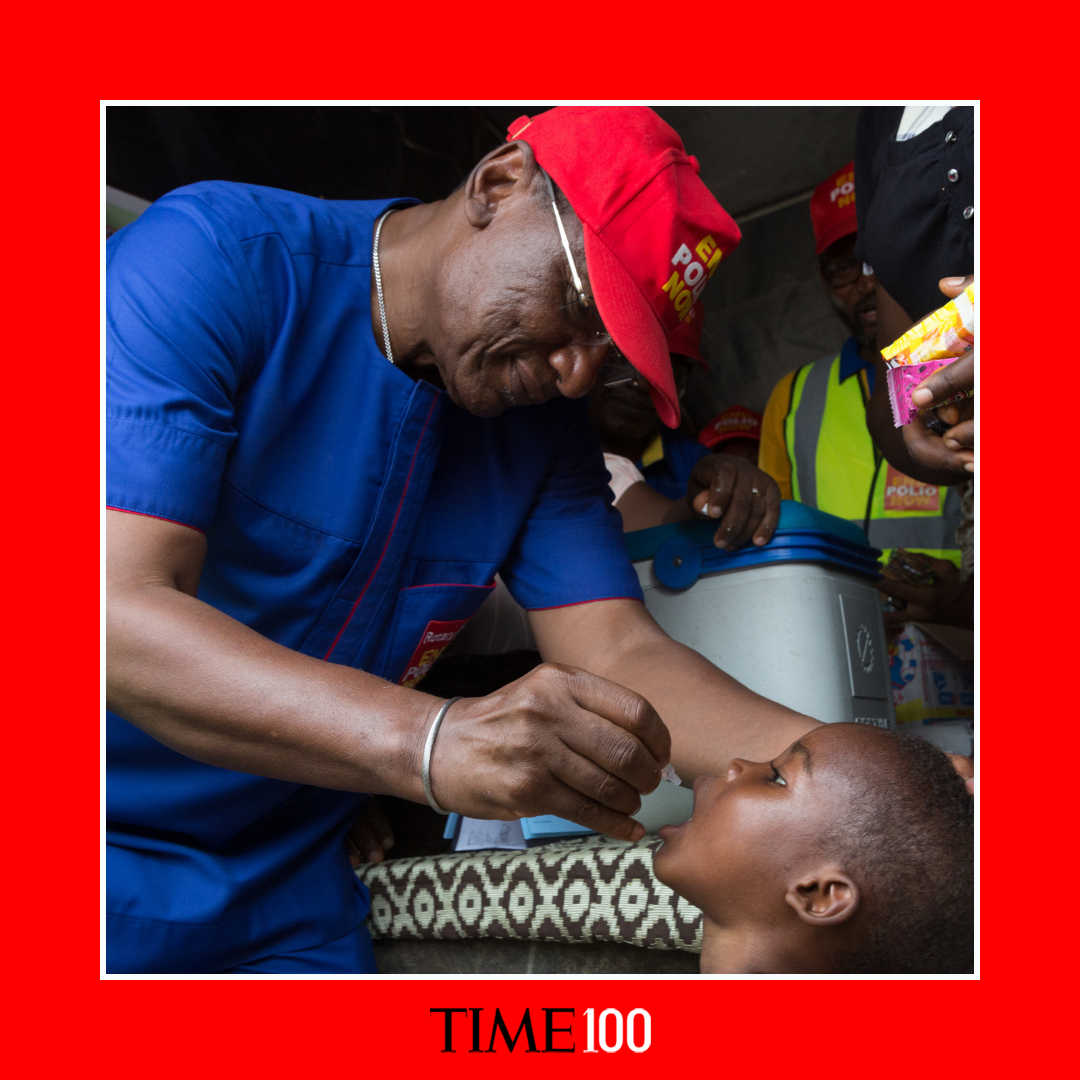 Dr. Funsho works closely with Rotary’s partners in the Global Polio Eradication Initiative (GPEI): the World Health Organization (WHO), UNICEF, the U.S. Centers for Disease Control and Prevention, the Bill & Melinda Gates Foundation, and Gavi, the Vaccine Alliance. As a member of Nigeria’s Presidential Task Force on Polio, he has coordinated immunization and advocacy campaigns with the Minister of State for Health and the Inter-Agency Coordination Committee for Polio Eradication. He has also worked closely with the Sir Emeka Offor Foundation, the Dangote Foundation, the Traditional Leaders Council and the Federation of Muslim Women’s Association of Nigeria.

In August 2019, Nigeria reached three years without a case of wild poliovirus. Nigeria’s progress, led by Rotary, its GPEI partners and local and national governments, was the result of decades of sustained efforts, including domestic and international financing, the commitment of hundreds of thousands of health workers, and innovative strategies to immunize children who previously couldn’t be reached due to insecurity in the country’s northern states.

On 25 August, the African region was certified wild polio-free. This historic announcement means that five of the WHO’s six regions, representing more than 90 percent of the world’s population, are now free of the wild poliovirus. The virus now endemic in just two countries, Afghanistan and Pakistan.

Rotary’s nearly 32,000 members in Africa have played a critical role in helping the region achieve its wild polio-free status by holding events to raise funds and awareness for polio, and working with world governments and national and local leaders to secure funding and support for polio eradication.