There was a reported panic near the popular River Niger bridge after the discovery of an object suspected to be an explosive which threw the residents into confusion. 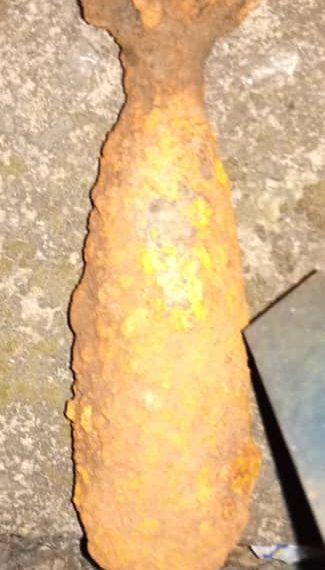 The strange suspected explosive discovered
Daily SUN reported earlier on Friday that there was panic among residents around the Asaba end of the River Niger Bridge following the discovery of a strange object suspected to be an Improvised Explosive Device (IED) otherwise known as bomb.
According to reports, the strange object was discovered by site workers who were digging a foundation for the perimeter fencing of the ‘C’ Division of the Delta State Police Command.
The discovery of the suspicious object threw the workers and the entire neighborhood into confusion, as some of even scampered for safety for fear of the unknown.
Divisional Police Officer (DPO) of the state, CSP Anietie Eyoh was adamant to speak on the discovery when approached, noting that the safety of his men, workers and Nigerian citizens was of paramount interest to him.
Confirming the discovery, however, the state Commissioner of Police, Anthony Ogbizi disclosed to a correspondent on phone that the object has been evacuated by men of the Bomb Disposal Unit of the command for analysis.
Related Post viewed by other