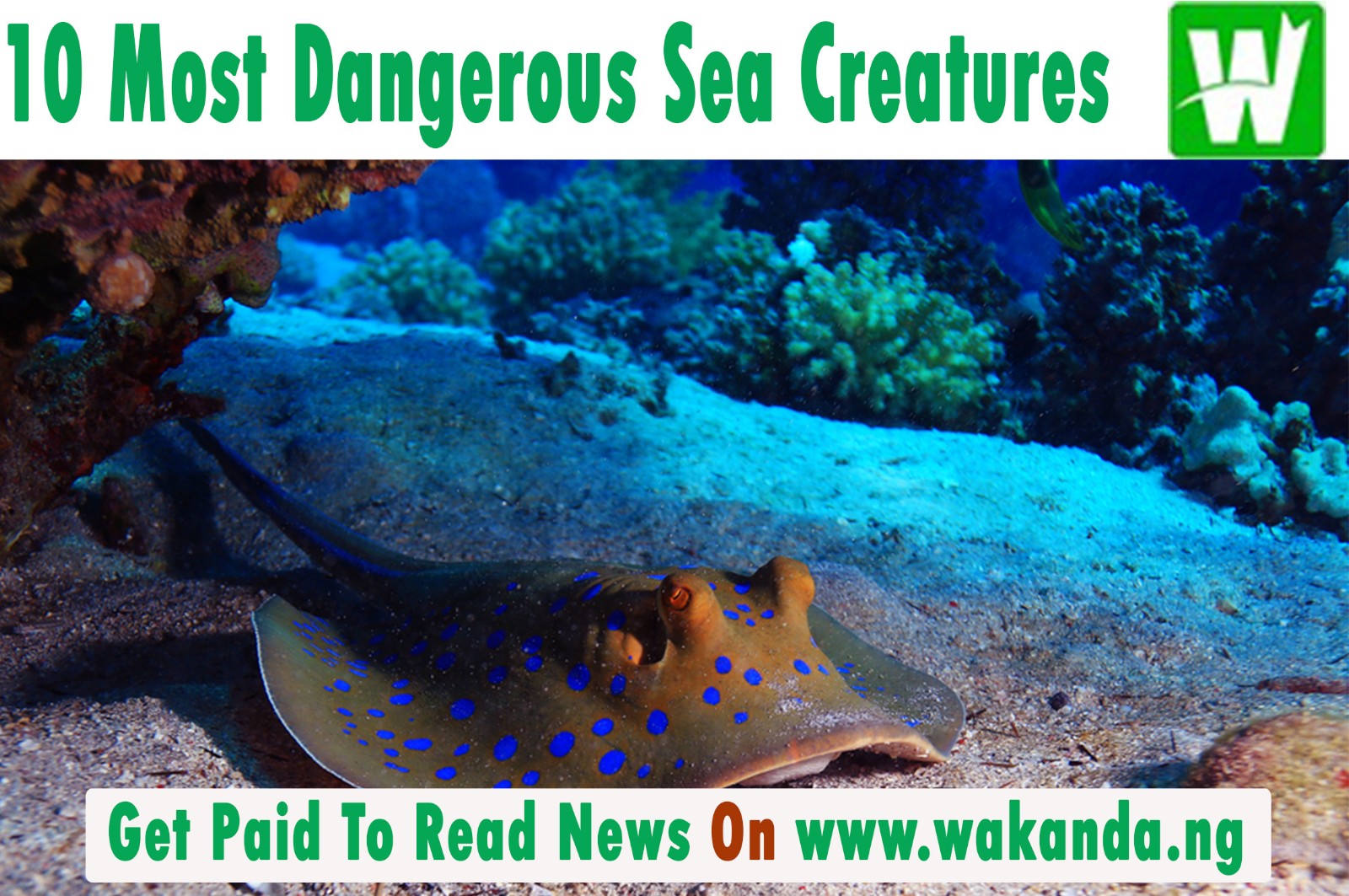 Lionfishes might look beautiful, but you shouldn’t let their attractive looks fool you. That is to say, these creatures have spines which won’t kill you, but contain venom so painful it is said to make you wish you were dead. Good news for divers is that lionfishes use their gruesome stings only to defensively - they won’t lie in ambush ready to poke you. If you are diving in the Caribbean or Eastern Atlantic which is where lionfishes are found, we still recommend you admire these beautiful white-striped creatures from a distance.

Sea snakes include about 30-50 different species, which are most likely to be met in the tropical waters of the Pacific and Indian Oceans. These creatures are part of the cobra family, and are two metres long on average. Sea snakes aren’t aggressive animals, but due to their highly toxic venom they wormed their way on our list: only three drops of their venom can kill about eight people! Even though sea snakes are likely to hide from humans, we recommend you don’t get too close to these fellows: in the unlikely event that sea snake wants to envenomate you, it can do so easily even through your wetsuit. If you happen to get bit by a sea snake, you are probably in need of a new wetsuit.

When thinking about the most dangerous sea creatures, snails are quite unlikely to come to mind. And that’s why number eight on our list might come to you as a surprise: cone snails are only 10-15cm long and look quite innocent, but a single drop of their venom is said to be enough to kill 20 men! If you are an enthusiastic shell collector, we recommend you handle these fellows with care. Cone snails are far cry from aggressive chasers (wouldn’t work very well for a snail), but rather harpoon their prey with hollow teeth and inject lethal venom through. Cone snails can be met in the deep reef waters all the way from the Indian and Pacific oceans to the Caribbean and Red seas and also along the coast of Florida, but the ones lurking in the Indo-Pacific region tend to have more harmful toxin than others. We recommend not to try your luck anywhere with these creatures though: the nickname for “cigarette snail” derives from the fact that after a sting, you’ll have just enough time to smoke a cigarette before you die!

Did know what kind of predator was responsible for the death of the world-famous “Crocodile Hunter” Steve Irwin on the coast of Australia in 2006? The cold-blooded killer was an Australian bull ray, one of the largest species of stingrays which made seventh on our list. But calm your nerves. Your chances of being attacked by a stingray are next to nothing. That is to say, stingrays don’t actually hunt for divers and swimmers. You will be stung by a stingray only if you step on it and it will defend itself by using its sting - we recommend you watch your step since the venom of these creatures is extremely painful and some stingray species can be fatal to humans.

How many of you have the horror stories about almost two metres long sharp-teethed barracudas that leap out of the water and seriously injure some unsuspecting people in boat? There is no such thing as flying killer fish, but number six on our list, the great barracuda, is known to have attacked humans. To make you feel better, you should know that these attacks are extremely rare and occur when barracuda tries to steal prey from a spear - something divers don’t have to worry about. The appearance of these predators is more than likely to make you at least a little cautious though: the great barracudas have a body shaped like a torpedo and two rows of razor-sharp teeth. And if you need one more reason to why you should not try to make contact with these creatures (nor eat them), here’s a good one: the great barracudas’ flesh sometimes contain toxin which can cause serious symptoms from vomiting to leg weakness - and those symptoms can last more than three months.

Fifth on our list is flower urchin, which has made its way to the Guinness Book of Records as the world’s “most dangerous sea urchin” - and not without reason. Flower urchin’s sharp (and extremely venomous) spines make it the kind of creature you really don’t want to step on! As you might already have learned the hard way that standing on a sea urchin is no walk in a park, flower urchins are in a league of their own when it comes to painful defensive mechanisms. Unlike other sea urchins, the stings of these creatures not only hurt like hell, but they can also cause paralysis which may even lead to death.

The next predator on our list has a camouflage beyond compare - which adds your danger if you happen to be a super-venomous creature like a stonefish. Let us introduce you number four on our list: the stonefish, also known as the most venomous fish in the world. These fellows might not be more than 30-40 centimetres long, but they are a living proof of the fact that you don’t have to be great in order to be a threat. The venom of a stonefish can cause excruciating pain, temporary paralysis and even heart failure - good thing there are some pretty effective antidotes available, right? The reassuring fact for divers is that stonefishes won’t actually attack you: these creatures use their venom only as a defensive mechanism and kill their prey with quick attacks instead.

Do you know what kind of creatures weigh only around 30 grams, but contain enough poison to kill over 20 humans? Third on our list is tiny (but deadly) blue ringed octopus, whose paralysing venom is 1200 times more powerful than cyanide - a type of creature you don’t want mess with! Good news is that these creatures don’t want to mess with you either: they avoid any confrontation with humans and eject their venom only when provoked or stepped on. There is no effective antidote to the venom and only treatment is to treat the symptoms until the venom dissipates (which usually takes 24 hours). That’s enough at least for us to not to go after these fellows!

No listing of predators is complete without some huge reptiles, right? The second place on our list goes (unsurprisingly) to saltwater crocodile, which kills on average two people per year. These “salties” are branded as the most dangerous animal of Australia - that’s really something considering we’re talking here about a continent infamous for its deadly fauna! Weighing up to 1200 kilograms, saltwater crocodiles are the largest crocodilians on the planet. And with their size comes lethal power: saltwater crocodile has the most powerful bite in the world, and its jaw has 10 times more strength than the great white shark’s. Unlike other predators on our list, “saltwater crocs” are murderous on both land and sea: they might not be as fast on dry land as some horror stories tell, but they can swoop attack quicker than us poor humans can react.

The most dangerous sea creature on our list might not have rows of razor-sharp teeth (or any visible mouth at all), but it has caused more human deaths in Australia than snakes, sharks and saltwater crocodiles combined. These creatures are transparent and pale blue in color, which makes them almost invisible - it actually took quite a long time before anyone even realized, what was causing unsuspecting swimmers and divers such agonizing pain. One box jellyfish contains enough venom to kill up to 60 people, and what makes them even more dangerous is their venom’s speed of acting: the sting of a box jellyfish can kill you in less than five minutes.

Unlike other jellyfishes floating with the currents, these fellows can swim. Other trait that sets them apart from other jellyfish is their ability to see: they have clusters of eyes on each side of their box-shaped body. These abilities support the belief that instead of waiting for food to bump into their tentacles, box jellyfish might hunt for prey - fortunately for us, their menu consists of small fish and shrimp, not humans! If you book a dive in Australia or tropical South East Asia, which is where these buggers live, we recommend you equip yourself with a sting-protector like this Hydroskin suit from Fourth Element