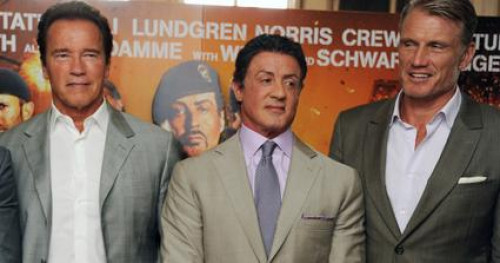 This squad is anything but Expendable. Hollywood action legends Sylvester Stallone, Arnold Schwarzenegger and Dolph Lundgren got the gang back together this week for a night of partying, which the trio documented in a video that Stallone then shared to Instagram. "Men that refuse to grow up," Stallone wrote in the caption. "Actually why bother??? We're having fun! Grow old UNgracefully!!!"

View this post on Instagram Men that refuse to grow up. Actually why bother??? Were having fun! Grow old UNgracfullly!!!!!! @schwarzenegger @dolphlundgren A post shared by Sly Stallone

The three actors joked around in the video, with Stallone saying his hand (which in typical boomer style was covering half the screen) looked better than Schwarzenegger's face, to which Schwarzenegger replied: "Sly thinks his hand looks better than my face? Look at how handsome I am. Look at Dolph! Look at this beauty here! He cannot stand it to have so many beautiful guys around him!"

Lundgren, who looks pretty great at 61 years old, just laughed, while Stallone said: "We are ageing so well like a couple of saddles in the desert."

The three actors have all worked together multiple times in various action movies: Schwarzenegger and Stallone starred together in Escape Plan, all three of them were in the Expendables movies (Arnie started out with a cameo in the first movie and then had an expanded role as the series went on), and of course Stallone and Lundgren first appeared on-screen together as bitter rivals Rocky Balboa and Ivan Drago in Rocky IV.

Stallone recently spoke out about his frustrations with the producers of the Rocky films, saying it's unfair that he was never given an ownership stake in the franchise despite being the one who created the character in the first place. It looks like a night out with his old buddies has cheered him up!