Horror! Truck Crushes Motorcyclist And Two Others To Death In Ogun

A truck has reportedly crushed a motorcyclist and some two others to death in a community in Ogun state. 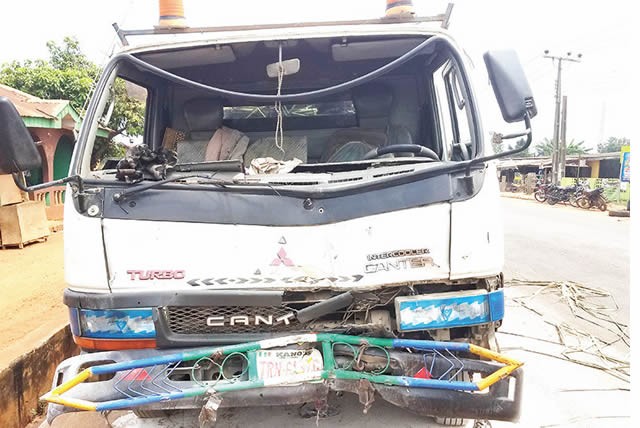 A yet-to-be identified truck driver, on Monday, caused the death of three people in the Oke-Odan area of the Yewa South Local Government Area of Ogun State, Punch Metro reports.

It was gathered that the victims, a motorcyclist, Ogunide Olorunto, Tobi Elegbede and Yemisi Agolo, were on their way to the Atan area of the state from Benin Republic, when the driver lost control of the tomato-laden truck with number plate, TRN 643 7G, and crushed them to death.

An eyewitness, Idris Tijani, said the truck driver refused to stop after ramming the victims, adding that after he was forced to stop by the residents, he ran into the Oke-Odan Police Station for safety.

Tijani said, “The motorcyclist and his two passengers were coming from Idiroko, while the truck was coming from Sango-Ota; the driver lost control of the truck, left his lane and rammed the people on the motorcycle.

“After knocking them down, he did not stop; instead, he dragged the motorcycle and those on it in the hope of escaping. In the process, the motorcycle’s fuel tank caught fire. The residents, who saw that the driver was trying to escape, stopped him and immediately he ran into the Oke-Odan Police Station.”

A national of Benin Republic, Peter Idowu, told Punch Metro that he and Olorunto left Benin Republic conveying two people each on their motorcycles.

He stated that Olorunto overtook him on the way to Atan and later someone, who witnessed the accident, called to inform him that Olorunto and his two passengers were involved in an accident and had died.

Punch Metro witnessed a shouting match between operatives at the Oke-Odan Police Station and some Beninese, who were adamant on recovering the remains of the victims to bury them according to Islamic rites.

Olorunto’s younger brother said, “Around 11pm on Monday, a friend of mine who lives in Lagos called to ask after Olorunto and I told him that he had gone to Lagos.

“Later, someone came to our house to inform my father and I that my brother and his passengers had an accident on their way to Atan and that they had died. He said we needed to go to the scene of the accident to recover the corpses so that we could bury them accordingly. We have been here since 4am, but the police have refused to release their corpses.”

When contacted, the Ogun State Police Public Relations Officer, Abimbola Oyeyemi, said the truck driver had been detained and the vehicle impounded, adding that the remains of the deceased had been released following the insistence of their relatives.

Oyeyemi stated, “When the accident happened, those people who died were on a motorcycle and had head on collision with the truck that was conveying tomato. The victims were coming from Benin Republic and were going to Atan.

“On the insistence of their relatives, their remains have been released and taken to corpses to Benin Republic. The driver has been detained and the vehicle impounded.”