How To Do A Bicycle Kick On The Pitch: Ronaldo, Zlatan & Best Overhead Goals 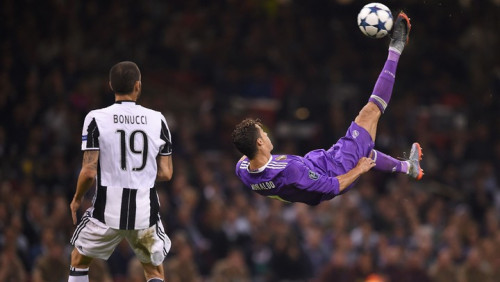 We all want to emulate our heroes on the football pitch, but figuring out how to score a bicycle kick takes plenty of practice and luck.

There are certain skills that footballers do on a pitch which bamboozle opponents and send spectators home with a sense of awe.

Things such as stepovers and mazy dribbles where players glide past defenders are commonplace, but a bicycle kick goal is a much rarer occurrence.

Its relative rarity makes it all the more sweet when it is successfully achieved and some of the game's best players have managed to do just that.

We take a look at the bicycle kick, how to do one and some of the best examples from the game.

What is a bicycle kick？
A bicycle kick is a method of striking the ball in football which involves a player being airborne while connecting.

Also known as an overhead kick and sometimes as a scissors kick, it is called a bicycle kick because the kicker's motions when attempting it bring to mind the action of pedalling a bike.

The bicycle kick usually requires a player to have their back to the goal and, after jumping into the air, the aim is to kick the ball backwards or over one's head into the net (hence the alternative name, overhead kick).

When and where a bicycle kick first originated remains the subject of debate, but it is felt to have gained popularity first in South America before spreading across the world.
Successfully executing a bicycle kick requires a high level of skill and physical dexterity, as well as a lot of practice so that if the opportunity arises during a game you will be well prepared.

It can only be done when the ball is travelling through the air towards the kicker, either from directly above or the side at a height.

Here is a step-by-step guide to performing a bicycle kick:

1. Keep your eye on the ball at all times.

2. Jump using the leg that you kick with while also bringing your other leg up.

3. Allow yourself to fall backwards while in the air.

4. While airborne, use your kicking leg to kick at the ball, while also bringing your free leg down simultaneously.

5. Position your arms and body to break the fall.

Be aware that a bicycle kick is a high-risk skill to perform on the pitch given the nature of the maneouvre and the potential for collision.
Ronaldo bicycle kick goal
One of Cristiano Ronaldo's most iconic goals was a bicycle kick which he executed to perfection while playing for Real Madrid in the quarter-final of the 2017-18 Champions League againt Juventus.

Having scored the opener in Turin - and making history in the process - Ronaldo's second goal of the evening was an acrobatic effort that will live long in the memory of all who witnessed it.

Indeed, so impressed were Juve fans by the strike that they rose to their feet and applauded the feat of the Portugal star - an act which had a profound impact on the player.

"It was, in my opinion, one of the best goals of my career so far," Ronaldo said in a subsequent interview with DAZN.

"And, of course, when the people start to applaud me in the stadium I was like, ‘wow'.

"It surprised me a lot because this has never happened in my life, so it was an unbelievable moment."

Bale bicycle kick goal
Not to be outdone by his erstwhile team-mate Ronaldo, Gareth Bale produced an equally outstanding bicycle kick goal in the 2017-18 Champions League final for Real Madrid against Liverpool.

With the score poised at 1-1, Bale entered the fray as a substitute just after the hour mark and a few minutes later he was flying through the air to send the ball beyond the reach of Loris Karius.

Remarkably, the strike was the Wales international's seventh touch since his introduction and he then went on to score the all-important insurance goal with seven minutes left on the clock.

"It was just one of those things. It was the perfect height and it's just instinct, you just try these things," a typically understated Bale told UEFA of the goal.

"Thankfully it came off. I made a great connection with the ball and it was great to see it go into the back of the net."

Curiously, however, Bale's bicycle kick goal in the final lost out to Ronaldo's quarter-final effort against Juventus for that season's UEFA Goal of the Season award.

Ibrahimovic bicycle kick goal
For some, Zlatan Ibrahimovic's arrogance is off-putting, but the former Barcelona and AC Milan star consistently backs it up and it will be no surprise to learn that he scored arguably one of the best bicycle kicks.

It came in November 2012 in a game against England and he pulled it off from all of 30 yards after cannily anticipating the movement of Three Lions goalkeeper Joe Hart.

The bicycle kick goal was Ibrahimovic's fourth of the game, meaning he scored every goal in the 4-2 victory.
The Telegraph match report said of the goal that it could be "talked about as one of the greatest in the history of the game" and Steven Gerrard, who played in the match, said it was one of the best he had seen.

Since the goal came in a friendly match rather than a competitive, high-stakes encounter, however, it lacks a certain sheen. Nevertheless, it remains one of the most impressive examples of a bicycle kick.