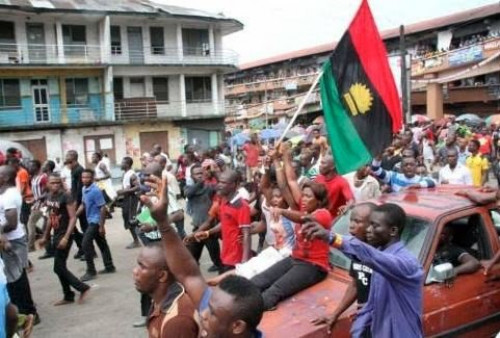 A Forum of Nigerian Professionals in Atlanta, Georgia, has urged United States President, Donald Trump, to put measures to in place to stamp out the Indigenous People of Biafra’s (IPOB) terror activities.
These well-meaning Nigerians made this known in a letter jointly signed by Pat Alao- Moses and  Moses Omotosho, its President and Vice-President, addressed to The White House on Friday.

According to the professionals, the piece was necessitated by IPOB’s persistent threat to their compatriots in the US and other parts of the world.
The group reminded President Trump of IPOB’s long-history of intolerance, disregard for constitutional authorities, bloodshed as well as failed attempts to constitute itself into a parallel government.

It is on this premise the Nigerians called on the US to activate all the necessary mechanism towards ensuring that IPOB members are well-monitored.
Being a terrorist group in Nigeria, the Forum advised Mr Trump to set up firewalls to deny fugitive leader Nnamdi Kanu entry into the country – else a repeat of the unfortunate 9/11 attack could be on the cards.

Mr. President may wish to recall that the Nigerian authorities recently raised a red flag on the activities of a group operating under the name Indigenous People of Biafra (IPOB).

This is on the heels of the attack on a former Deputy President of the Senate of the Federal Republic of Nigeria in Germany by members of this group.
Mr. President may wish to be informed that the history of IPOB in Nigeria is replete with tales of blood and sorrow, and they have attempted to constitute themselves into a parallel government in Nigeria which was resisted by the Nigerian military.

IPOB as a group has exhibited a great disdain for the Constitution of the Federal Republic of Nigeria and has in times too numerous to mention declared the creation of Biafra from the Nigerian state.
Mr. President, the nefarious activities of IPOB in Nigeria is not limited to confronting security agencies, burning down police patrol vehicles, attacking critical government infrastructures such as oil pipelines, government buildings, and vehicles, as well as killing and maiming innocent Nigerians who do not share in their ideology.

Mr. President, the last three years in Nigeria, has witnessed an uprising by IPOB, which has consequently resulted in avoidable deaths of over 300 innocent people that consists mainly of women and children.

This action prompted the Nigerian security agencies to move to address the situation quickly, and in the process, its leader, Nnamdi Kanu escaped from Nigeria alongside many of his lieutenants to other parts of the world including the United States of America.
Mr. President, you may wish to know that IPOB now has links with global terrorist networks and its continued operations in the United States of America may have far-reaching consequences for the safety of the lives of American citizens.

Mr. President may wish to see the threat posed by IPOB as real, and therefore there is an urgent need to activate all the necessary mechanism towards ensuring that IPOB members that dot the nook and cranny of the United States of America are monitored and consequently shown the way out of the United States.

Mr. President may wish to know that in Nigeria, IPOB has been proscribed as a terrorist organization and its leader Nnamdi Kanu jumped bail in his ongoing treasonable felony trial before a Federal High Court. Nnamdi Kanu as its stands is a fugitive on the run, and there is a tendency that he might seek to enter the United States of America from where he can coordinate the activities of IPOB.

Mr. President, we consequently wish to inform you that IPOB members are scattered across in the United States of America and they have been suspected to be holding nocturnal meetings at residences, offices, restaurants, pubs, clubs to evade the prying eyes of the security agencies.

Mr. President, the Forum of Nigerian Professionals Atlanta-Georgia, USA, is sending an SOS to you to ensure that Mr. Nnamdi Kanu is not granted permission to enter the United States of America under whatever guise.

This is because his presence might have unpleasant consequences for Nigerians residents in the United States and who do not share in the ideology of his terrorist group, as well as Americans who are going about their daily endeavours.

Mr. President, the unfortunate attack of 9/11 is still fresh on our minds hence this letter of appeal for your urgent intervention in addressing the security threat posed by IPOB members in the United States and its leader, Mr. Nnamdi Kanu should not be allowed entry into the United States of America.