Is Torture Justified When Used For National Security 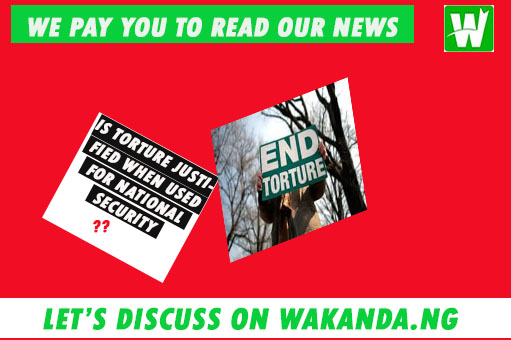 Officially a thing of the dark ages, torture is still used today. Many prisoners of war are tortured for information, as are suspects in malicious crimes. Yet, according to the Geneva Conventions, “torture, cruel or inhuman treatment and outrages upon personal dignity” is legally prohibited. Although this has been ratified by 194 countries, torture still occurs behind closed doors for a variety of security reasons especially in Nigeria.

Torture may be effective at getting people to talk, but it doesn’t mean they’re telling the truth. Take Khalid Sheikh Mohammed, a terrorist involved in the 9/11 attacks, who was tortured by the CIA after his capture; his mid-torture “confessions” led to the arrest of many suspected terrorists – all whom were found to be innocent.

Torture is abominable, no matter the circumstances.

So Is Torture Justified When Used For National Security? Let's Have Your Say