Tinubu Wanted To Be Vice-President To Atiku – Bucknor-Akerele 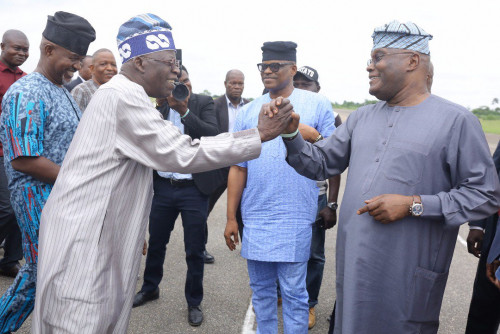 Atiku was vice president from 1999 to 2007, and was the presidential candidate of the Peoples Democratic Party (PDP) in the 2019 general elections.

Speaking in an exclusive interview with Daily Independent at the weekend, Bucknor-Akerele, who was elected as deputy to Tinubu on the platform of the defunct Alliance for Democracy (AD) in 1999, said Tinubu sought her support to hijack the party from the leaders so as to use it for his political ambition.

Speaking further, she said her refusal to support Tinubu in his plans was the genesis of her political travails which eventually culminated in her resignation in December, 2002.

Bucknor-Akerele said: “He (Tinubu) did call me and said to me that he thought we should take over the party from the elders, who were the founders of the party.

“When I asked him why he wanted to do that, he said he needed to take control of the party structure because he wanted to be vice president to Atiku Abubakar in 2007.

“I said but how is that possible since Atiku is not a member of our party? We are in Alliance for Democracy (AD) while Atiku belongs to the PDP? He said I shouldn’t worry about that and should just cooperate with him in his plans.

“As a principled person, I refused and that was the genesis of my trouble with him. I believed that we should face governance and that the founders of the party should continue to run the party.”

Bucknor-Akerele also denied the claim that her relationship with Tinubu got strained because of insubordination.

“Well, I don’t think it is insubordination because, as my principal then, there was nothing he asked me to do that I did not do, at least as far as my duties as the deputy governor were concerned.

“The only thing I didn’t do is to join him in taking over the party from the elders who had supported us and put us as governor and deputy governor.

“He wanted me to join him in taking over the party from the elders and I refused. I believed that was a betrayal of trust which I would not be a party to.”

Also speaking on the crisis in Afenifere, Bucknor-Akerele insisted that the Reuben Fasoranti-led Afenifere cannot work together with the faction led by Senator Ayo Fasanmi because they don’t share the same ideology.

According to her, while the Fasoranti-led Afenifere is protecting and fighting for the interest of the Yoruba, the faction led by Senator Ayo Fasanmi is fighting for Tinubu’s interest.

“To me, the Fasanmi faction is not Afenifere; the real Afenifere is the one being led by Pa Reuben Fasoranti.

“They then brought it to Nigeria, and it was at a meeting of the Egbe Omo Oduduwa that Akinloye said, ‘What shall we call this group to make it appeal to the masses? We can’t call it Egbe Omo Oduduwa’.

“He said why don’t we call it Afenifere? And that was how Afenifere began. Afenifere was the precursor of the Action Group (AG).”

Also speaking on her expectations from new ministers who were inaugurated by President Muhammadu Buhari last week, Bucknor-Akerele said she had no expectations because the APC-controlled Federal Government had nothing to offer.

“I have no expectations whatsoever from this government. None at all. This government has nothing to offer, as far as I am concerned. They said next level; next level to where? Into the dungeon? I am sorry, but Nigeria is in a very sorry state. Are we calling ourselves a nation now?

“Look at what is happening! The economy has collapsed, yet they keep on lying to us that the economy is doing well. When they took over in May 2015, Gross Domestic Product was 5.1 percent, but today it is 1.4 percent.

“We know the exchange rate of the naira to the dollar, what it was then and we know how much it is now. It is almost tripled, yet they promised us that they would make one naira equals to the dollar. So, you can see that this is a government of liars. They are only there to line their pockets,” she said.