What is it like to have one of your teachers die in high school?

“We’ll be ending class a little early today,” said Mr. Turk in his usual enthusiastic voice, “So you’ll be getting out by 7:30am today instead. Apparently there’s some faculty meeting in this room.”

The clock struck 7:30am and all of our zero period class shuffled out of the room, completely unknowing as to what was going on today.

“You ready for the Science Olympiad meeting today?” my friend asked me.

“Hell yeah bro!” I replied. “It’s in Mr. K’s room today after school, if you decide to change your mind.”

“Nah man, too big of a commitment.”

As I stood outside the door waiting for my first period class to start, my phone buzzed. 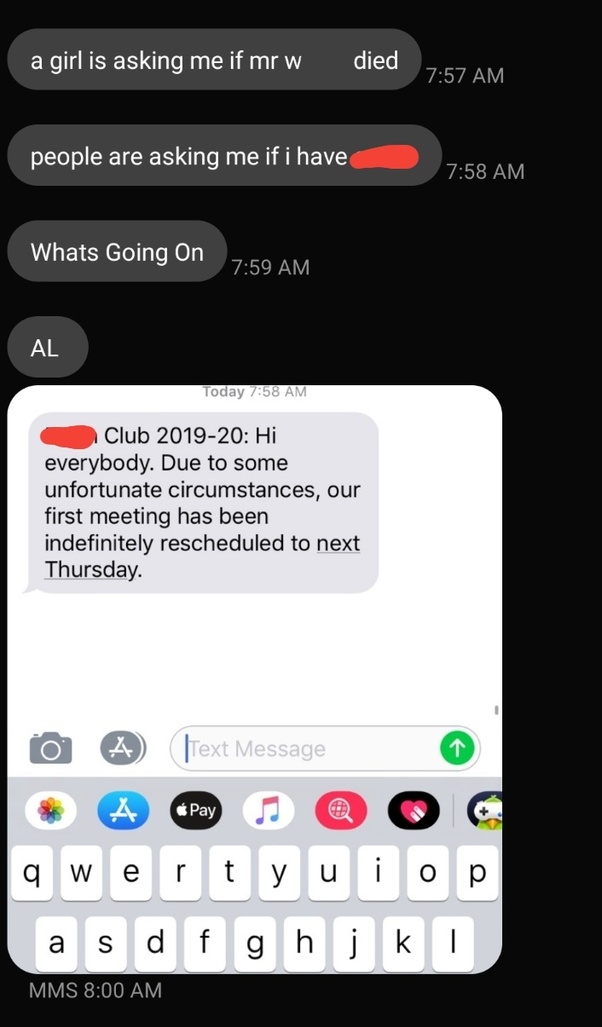 Without that screenshot I would’ve thought that it was just another bullshit rumor spreading like wildfire across the school. That kind of thing always happened.

And yet just a minute after, I got another text. From a completely different person. 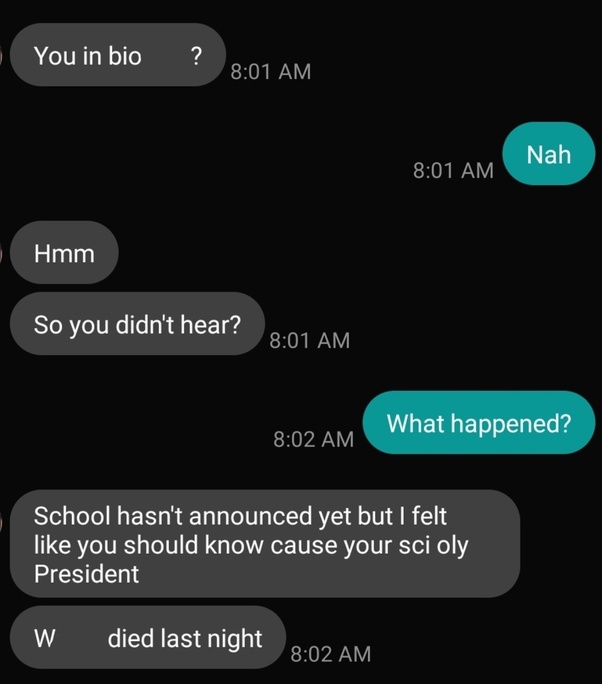 It couldn’t possibly be true. Sure, he had been out of school for a few weeks for a surgery, but it was a knee surgery. People just don’t die from knee surgery.

And yet just as class started, Mr. Turk — the same teacher who had let us out of class early just in the previous period — had his mood completely changed.

Mr. Turk is a regular very cheerful and energetic guy. He was like that in the morning. And yet now, he was glum. Moody. Frowning. Puffy-eyed.

And Mr. Turk, his hands shaking, leaning against the whiteboard, softly sniffling, looked up at the class.

“We’re not supposed to tell the class just yet until the school announces it, but I think it should be known…” he said, trailing off. “Mr. W and I have both taught together for 15 years. Great guy, hilarious, and he was someone I’ve always respected.

“He passed away last night in his home.”

A collective gasp from the class. And sudden the realization dawned on me that this “bullshit rumor” was actually true…

The class was silent. No side conversations, no whispering, just a grim and solemn look from everyone in the class. Mr. W was popular. Popular with everyone. And our first period class was one that was never quiet, and yet now we were all dead silent.

It was a bit too much for me to understand, too. Mr. W was the head coach of Science Olympiad. He was the man in charge of the team that I was so passionate about, and the only person that truly understood my passions and how much I cared about Science Olympiad. He shared that passion with me, and it was the one thing that made me so enamored with him as a teacher.

And yet now: he was gone.

My friends did not have an Environmental Science teacher. I did not have a Science Olympiad coach. Teachers all across the school were shaken, in tears, solemn.

My next class, our history teacher literally cried.

One of the biology teachers, Ms. Frizzle, had an emotional breakdown in class.

And it dawned on me then and there how much one life really meant. That one life, while it was there, was just another guy. Just another teacher. And yet now that he was gone we really realized how integral a part he played in our lives.

I’ve never experienced the death of anyone close to me in my life.

And it’s a horrible thing, to think about it, to realize how real it is and how you really don’t realize how important people really are and can be in your life.

It made me realize what I needed to do.

That I should live every day as if it were my last, because it very well might be.

That I should make sure that people have something positive to remember me by.

And most importantly, how much one life truly means.