Why does Bhutan have no KFC, McDonald's, Burger King, Subway, Starbucks restaurants?

Bhutan is a religious country and animal slaughter is strongly discouraged. Running KFC, McDonald's or Burger King would require several slaughter houses to be opened to meet the demand, which are against our religious value. Meat is one of the areas that Bhutan depends on the neighbouring countries.

Other reasons could be due to less number of cities and low population in each, for profitably operating the above mentioned business. Furthermore, many Bhutanese have chosen to remain vegetarian(following the teachings of great gurus or due to sympathy over the poor creature). So less scope of blooming the business in Bhutan.

Bhutanese are mostly middle class and others belong to low income group. There would literally be less people who can afford such an expensive meals. Even if they do, it would not be more than few times a year.

Bhutanese strongly discourages eating outside. People have breakfast in their homes sitting along thier large extended families. They have culture of carrying a lunch box when they leave for job. And make sure everyone is back home in the evening so that they can have dinner on time altogether. Having meals at home everyday with the family gives the feeling of togetherness which we value and encourage. This keeps family well knit. 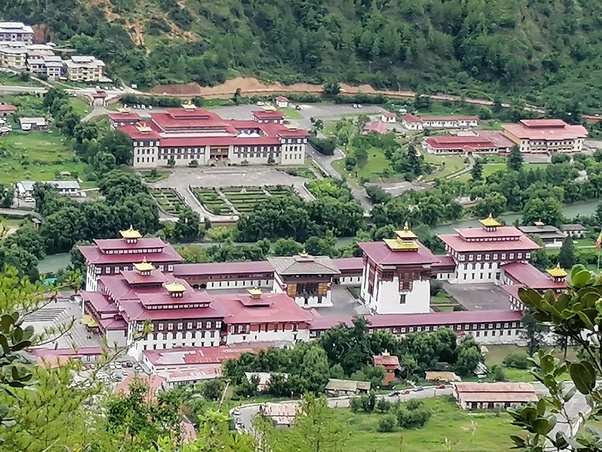 A random picture of Tashichoedzong fortress in the capital city of Bhutan, Thimphu.

Which Canadian province is easiest to get into through immigration?
By lanreadeyemi • 10 months ago

What strikes first time visitors as special or unusual when they arrive in Canada?
By lanreadeyemi • 10 months ago

How does it feel to visit the best country in the world, the United States of America?
By lanreadeyemi • 10 months ago

Do you find Canadian or US border agents more rude? Why?
By lanreadeyemi • 10 months ago

Why is Indonesia less developed than Malaysia?
By lanreadeyemi • 10 months ago