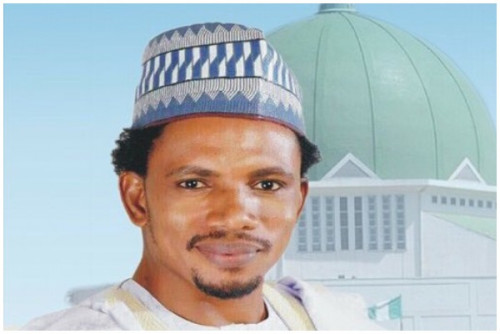 Adamawa- North lawmaker, Senator Elisha Abbo, has said that young people around the world are now learning from him and beginning to see the difference between aspiring for office and being in office.

Abbo said this while receiving the ICON of Democracy Award which was presented to him by the Intercommunity Awareness for Change and Development Initiative in Abuja last week .

The lawmaker, who was caught on camera assaulting a shop attendant , Bibra Warmate , at a sex toy shop , urged young who aspire to hold public office to note that what they had done in their past could be used against them in future.

He , therefore , urged them to be of good conduct at all times.

The senator recalled that when the video of the assault was published on social media , he became the number one trending topic on all platforms .

While speaking with a big smile on his face , Abbo said, “ You are all aware of what happened a few weeks back where certain things happened and I have been in the public space. I was the number one trending topic on social media . I was number one trending on Twitter and the rest of it but that is leadership.

“ That is politics for you . Don’ t be surprised that what you did 10 years ago would come back to haunt you and that is why you must always remember that even though you are a young person now , you will contest elections tomorrow.

“ It is therefore important for you to conduct yourself in a way such that when you win elections tomorrow , somebody will not use what you did 10 years ago to use it to blackmail you or tarnish your hard -earned reputation and image tomorrow. ”

While thanking the IACDI for the award , Abbo said he would use the award to further the cause of humanity.

He noted that the common enemy of humanity was not the political parties but hunger, disease and illiteracy .

In his remarks , Adamawa-South lawmaker, Senator Binos Yaroe , thanked the IACDI for using Abbo ’s challenge to turn a bad story into a good one .

The Secretary, Intercommunity Awareness for Change and Development Initiative, Dr . Lami Ouogho, while presenting the award earlier, thanked Abbo for his contribution to democracy in Nigeria.